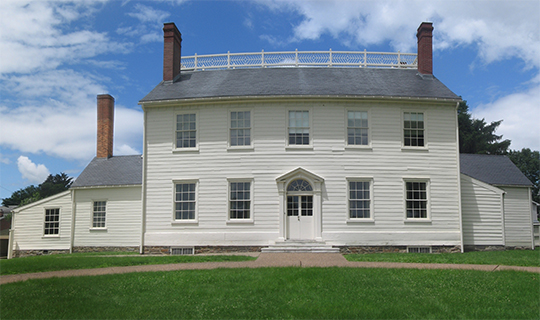 The Joseph Priestley House was listed on the National Register of Historic Places in 1974. Portions of the content on this web page were adapted from a copy of the original nomination document. [1]

The Joseph Priestley House stands on a rise above the North Branch of the Susquehanna River, at Northumberland, Pennsylvania. Priestley built the house circa 1794. It is a two-and-a-half story frame house, covered with white clapboards and resting on a stone foundation. The clapboards were kiln-dried on the grounds. The house consists of the two-and-a-half story center section, measuring 48 by 43 feet, and two set-back one story wings on the north and south measuring approximately 22 by 21 feet. These wings housed Priestley's laboratory and the summer kitchen, and there is a small woodshed attached to the kitchen wing.

The center section has a gable roof, with a deck and railing. The roofing is slate tiles, and there are three internal gable end chimneys, one for the main kitchen, and each with a fireplace on the first and second floor.

The front of the house faces the river, and a circular carriage drive in the front yard is historic in design but concrete has replaced the gravel and clay. The twin front door and fanlight is sheltered by a shallow portico, as is the rear door. A dentil cornice runs above the five second floor windows on the front and rear.

The interior of the center section consists of four rooms over four, on each floor, a center hall, and an intersecting hall to the laboratory. The attic has three servants rooms and a larger storage room. The four part cellar houses a modern heating plant.

Furnishings are correct for the 1794-1804 period, with some Priestley scientific apparatus displayed in the laboratory and library.

The house has been restored by the Pennsylvania Historical and Museum Commission, but there are intrusions on the property i.e., the 1926 brick structure east of the house, which is used to house exhibits, and the Pennsylvania Canal (closed 1902) and the Delaware and Lackawanna Railroad, which run across the original lawn, between the house and the river.

The brilliant chemist Joseph Priestley, was responsible for several major breakthroughs in pneumatic chemistry, including the discovery of oxygen and carbon monoxide. Despite his scientific achievements, however, Priestley's liberal political and religious views generated such strong sentiment against him that he chose to emigrate to America. The Country's reception of the Englishman not only testified to the democratic spirit of the young Nation, but also stimulated her scientific development.

The Joseph Priestley House, on Priestley Avenue, in Northumberland, Pennsylvania, was built by the chemist and served as his home from 1794 until his death in 1804. It has been restored and is maintained as a museum today by the Pennsylvania Historical and Museum Commission.

Priestley was born in Leeds, England, on March 13, 1733. Reared in a Calvinist environment, he decided to be a minister, and finished his theological training when 22. He possessed very liberal views and became a dissenting minister. In 1761, Priestley became a teacher at the Warrington Academy, where he stayed until 1767. It was during this period that he first became interested in chemistry. Perhaps his friendship with Benjamin Franklin spurred his scientific interests, for that association stimulated Priestley to write a History and Present State of Electricity. The Royal Society of London awarded him a membership in 1766 because of that book. In the following year, the neophyte scientist moved to Mill's Hill Chapel, Leeds, where his position allowed more time for scientific study.

Untrained in science as he was, Priestley chose a field that offered great opportunity for new work, pneumatic chemistry. The study of gases had attracted attention prior to Priestley's time, but it was he who became the "Columbus" of the gaseous world. And it was the brewing of beer that caused this keen observer to investigate gases.

The smoke that hovered over beer as it was brewed in a brewery near Priestley's residence in Leeds intrigued the minister. He set out to study the gas, and in 1772 he published his initial paper on pneumatic chemistry. In it he described his experiments with carbon dioxide; the paper won him the Copley medal in 1773. Hampered by a lack of implements, Priestley devised his own equipment, most of which has been little modified and is still used. Fascinated with his investigations, Priestley pursued his study and in 1776 discovered one of the key elements, oxygen. It was an astounding discovery for an individual who had been untrained in science and who had only initiated his work a few years earlier. Priestley continued his scientific investigations after 1774, although oxygen remained his great discovery, and by 1786 he had published six volumes of scientific writings.

Priestley's work in science had not completely dominated him. He continued to be active in religious affairs, as well as assuming a positive role in political matters. The liberal religious and political views he espoused maddened many. In 1780, the fearless crusader became the leader of a dissenting group in Birmingham, which city expressed small love for a new book of Priestley's, Corruptions of Christianity. Moreover, he gained additional enemies, some of them in powerful positions, when on January 1, 1791, he published a strong defense of the French Revolution. The pamphlet fearlessly denounced Edmund Burke's castigation of the revolution across the English Channel.

Priestley's courage soon brought personal disaster. A mob howled through Birmingham for three days in July, 1791, and it destroyed the scientist's meetinghouse and home. Priestley, personally uninjured, then moved to London, where he lived for three years. Already unpopular, Priestley's stock did not rise when France honored him with French citizenship. In these circumstances, it is not strange that he turned to America.

Priestley's sons had already migrated to the United States, and on April 8, 1794, the scientist boarded the Sansom for the trip to America. The emigre, who was sea-sick during voyage, landed in New York on June 4. On the following day, the American Daily Adviser welcomed Priestley and his wife, saying that America "has become the asylum of the greatest characters of the present age."[1] The new immigrant went to Philadelphia on June 18, where he was welcomed by the American Philosophical Society. Perhaps the Society's members would have been a little piqued if they had learned that Priestley wrote a friend, saying "I never saw a town I like less than Philadelphia."[2] By the end of August, Priestley had bought land in Northumberland, where he built a house.

The scientist continued his investigations in his new home. His most important discovery between 1794 and 1804, when he died, was carbon monoxide. He also became a member of the American Philosophical Society and contributed several papers to it.

At his death, on February 6, 1804, America lost a new son and the world an eminent scientist.