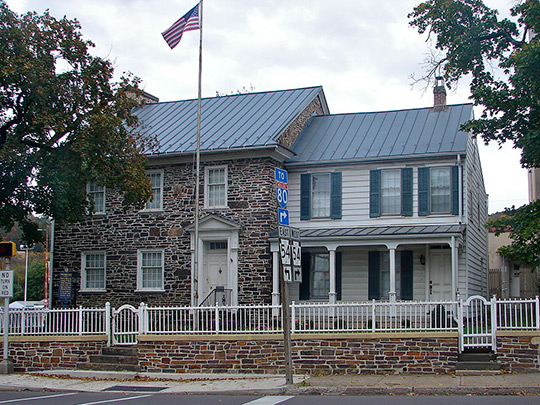 The General William Montgomery House (1 Bloom Street) was listed on the National Register of Historic Places in 1979. Portions of the content on this web page were adapted from a copy of the original nomination document. [1]

The General William Montgomery House (presently a museum owned by the Montour County Historical Society) is a two and one-half story random-laid stone structure with a pedimented gable roof. An interior stone chimney is located in the western gable end. The roof is asbestos tiled and the cornice is wide and boxed. Cornice on the gable ends tends to be wide and forms a small pent, as its upper surface is finished with roofing material. A two-story, gabled roof wing is located on the north (rear) elevation. This roof is tin covered.

The main house is three bays by two bays. Windows throughout the structure are 6-over-9. Lower story windows have paneled shutters, second story louvered, shutters. The window west gable end is 3-over-6.

The interior of this structure is in excellent condition and little altered. Floors are wide plank, all walls are painted plaster with chair rails. Small fireplaces are located on the first story western gable end. The first floor is divided into a wide side hall with two rooms to the west. The wing to the rear has only one room with an enclosed stairway at the rear. There was no interior kitchen in the house. Apparently a separate kitchen building was located to the rear of the house. The second story is divided into three small rooms with two rooms in the wing.

Attached to the stone structure is a gable roofed, two and one-half story log and frame structure. The core of this building is felt to be the first Montgomery House, built in 1777. The structure is three bays by two bays and has been remodeled extensively on the interior and exterior.

General William Montgomery was the founder of Danville, the county seat of Montour County. He was also an important Revolutionary patriot, general, congressman, postmaster and judge.

William Montgomery was born August 3, 1736 in Londonderry Township, Chester County. Even before the Revolutionary War, he was a prominent man in his native county. His first appearance in public was as a member of the "Associators" of Chester County. Next he was a delegate from Chester to a convention "of the people of the province of Pennsylvania called by the Philadelphia Committee," January 23, 1775.

The "Associators" was an organized body of patriotic citizens mutually bound to each other to resist the "tyranny attempted to be established in the province of Pennsylvania by the court of Great Britain." The convention provided for a call of the group again "if it appears that the state of affairs necessitates in effect a provincial government." Again, as a Chester County delegate, June 18-25, 1776, he was present at a meeting of the Committee of the Province of Pennsylvania in Carpenters' Hall, Philadelphia. He was then referred to as Colonel Montgomery. Montgomery was appointed one of a committee to devise ways and means for raising 4,500 men and to fit them for the field. The province had 1,500 in service at the time which, with the 4,500, made the provincial quota as required by the newly formed Congress of the U.S.

In June, 1776, Colonel Montgomery's Fourth Chester County Militia, known as the "Flying Camp," numbering 450 men, were in New Jersey. They also probably engaged in the battle of Long Island in August of that year. Several of his officers were in Fort Washington when that post was captured in November. When on November 26, 1774 William Montgomery bought 180 acres of land on Mahoning Creek, north side of the east branch of the Susquehanna River called Karkaase, he founded Danville, for this is the land on which the town was originally laid out.

Despite the unsettled state of affairs connected with the war and the general distrust of the Indians, he confidently set about building his grist and saw mills, near the Mill and Bloom Streets intersection. In time he established the first woolen mill as well as the first story (the latter on the site of Montour Hotel, southeast corner of Mill and Market Streets). In fact he started the first of nearly everything, although in truth he guided his son, Daniel, in starting the store.

In the year, 1792, that he began a two year term as member of the Third Congress of the U.S., he built his stone mansion at No. 1 Bloom Street. For many years it was considered the finest house in the region. The old log house adjoining was the first house in Montour County.

William Montgomery became a "General" when Governor Mifflin appointed him to a seven year commission as Major General of militia for Northumberland, Northampton, and Luzerne Counties. Governor Thomas McKean made him an associate judge of Northumberland County in 1801, the only public office he held from then until his death in 1816.