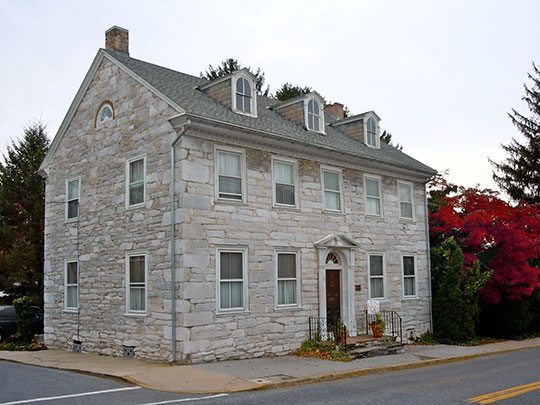 The Biever House (49 South White Oak Street, Annville PA) was listed on the National Register of Historic Places in 1976. Portions of the content on this web page were adapted from a copy of the original nomination document. [1]

The Biever house is a five bay 2 1/2-story house constructed in 1814 in the Georgian style. The house is constructed of limestone with huge quoins. An attempt at regular coursing was made on the facade but the gable ends and rear of the house are very irregular. Window frames are pegged and mortised. The window sash is not original.

The main doorway features a broken pediment with finial supported by reeded pilasters. The recessed doorway has an elegant sun burst transom. The design work on the side panels and door frames consists of a series of gouged panels and six pointed stars done in pick work. This pick or punch work design is also used in the cornice decoration. A series of attached pendants is offset by a semi-circular chain of pick work and a band of geometric designs. The three gable roof dormers on the front slope of the roof also feature this pick work design. The gable ends are two bays wide with brick chimneys located within each gable wall. The fan window in the attic level has a brick arch and pick work done in a swag motif.

A two story, two bay stone addition was added to northwest corner of the house in the mid-19th century. The addition has a two story frame porch on the south side. The doorway to the addition on the north side has a full pediment supported by reeded pilasters. The workmanship, however, is far more crude than the doorway on the main facade. There is also a small brick summer kitchen located to the north of the house. This 1-1/2 story brick building has a very nice Victorian cornice with the barge board done in an inverted fleur-de-lis style.

The interior of the house has been converted into three apartments. However some of the interior wood work still survives including two very nice corner cupboards in the front parlors.

The community of Annville was established in the late 18th century as a marketing center for the rich farm land which surrounds it. The community was settled by German immigrants and in 1840 had a population of 500. During the 19th century the town had a number of manufacturing concerns including two large factories for the manufacture of silk hats and a large shoe factory. The Biever family arrived in Annville circa 1800 and quickly became one of the leading families of the community. John D. Biever 1812-1880 was perhaps the most noteworthy of the family, holding several political offices and operating a large tanning establishment south of his residence.

The Biever House is an excellent example of the rural Georgian style house. It displays some excellent craftsmanship In the wood work of the main doorway. The house also displays an extensive use of pick work in the decoration of doorways, cornice and window frames. It is one of three stone houses in the community displaying an extensive use of pick work. The house is well maintained and in good condition.