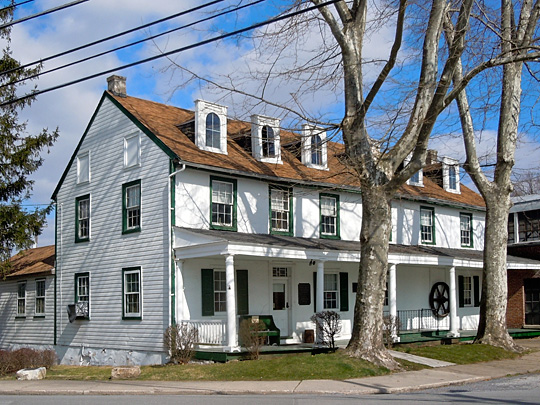 Christiana was incorporated from Sadsbury Township, March 1, 1894. It is on land that was granted to twenty-one servants, so-called, and which has since been known as the "servants' tract." The plot was surveyed in 1709. The title recited that: "WHEREAS, John Thomas, Margaret Thomas, Anthony Morgan, Elizabeth Morgan, John Jones, Richard Kanthroll, Daniel Thomas, Elinor Thomas, John Floyd, Humphrey Edwards, Jeremiah Osburne, Elias Curne, Jacob Willis, Evan Williams, Margaret Williams, Edmund McVeigh, Alice McVeigh, Abraham Pratt, Jane Pratt, Thomas Pratt, and John Pratt, all of the Province of Pennsylvania, having come over servants into the province at the settlement thereof, and thereby having severally rights to fifty acres of land each in said province by virtue of the Proprietaries promise in England." The town was laid out by William Noble in 1833, and named for his wife, Christiana. Noble erected the first industry, which was an extensive foundry, blacksmith shop, machine shop, and a general manufacturing enterprise. Most tragic of the anti-slavery riots prior to the Civil War took place here September 11, 1851.