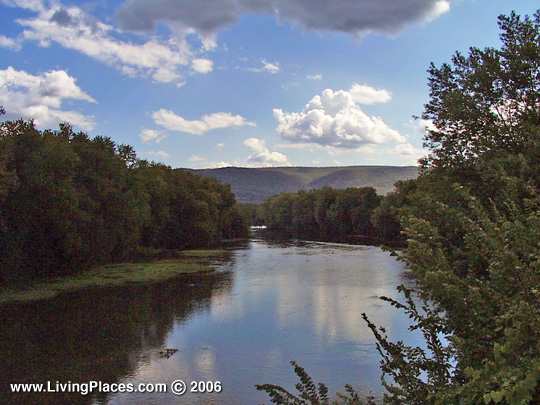 The Juniata River [†] and its valley have been used and influenced by native Americans and settlers for hundreds of years. For centuries, numerous Indian tribes occupied the river valley, establishing well-worn trails up and down the mountain-fringed corridor. The valley, with its east-west orientation, made an attractive route through the Allegheny Mountains to lands west. In the 1700s, fur traders, missionaries, explorers, and pioneers began moving west along the valley, using the old Indian paths and then building their own crude roads. The first settlers to the Juniata valley were largely the Scotch-Irish who immigrated for religious reasons. Most were Presbyterians, although a good number of Lutherans and some Roman Catholics lived in the valley, too. These first settlers were later followed by a large influx of German immigrants. Industry and settlement remained sparse due to the isolation of the area and the difficulty of transportation. The Juniata, especially the Frankstown Branch, became one of the early main travel arteries through the interior of Pennsylvania to the Ohio valley. Trading preceded agriculture as early inducements for settlement along the western Juniata, with several outposts built in key locations in the mid 1700s. Communities coalesced around trading establishments at what became Shirleysburg, Huntingdon, and Frankstown, among other places, during the middle of the 18th century. Forts built to protect settlers from the ravages of Indian warfare also encouraged settlement on adjacent tracts.

In 1771 the Pennsylvania Assembly declared the Juniata a public stream and highway for navigational purposes, thereby acknowledging the river's social and economic importance to the colony. While the pronouncement boosted travel and trade in the region, it was during the post-Revolutionary War period that settlement increased all along the Pennsylvania frontier. Huntingdon burgeoned into the preeminent economic hub because of its location on the river.

During the early 1800s the Juniata valley became a major turnpike route between west and east, and beginning in 1821 the Huntingdon, Cambria, and Indiana Turnpike routed traffic west through the mountains. By then, numerous agricultural settlements had evolved along the Juniata, usually at key convergence points of trails or water tributaries. In time the valley, with its rich soil, became noted for its production of grains and grasses. It also supported large numbers of horses, cattle, and sheep. Agriculture-associated industries in the region included woolen mills, gristmills, flour mills, and breweries.

During the 1830s, the coming of the Pennsylvania Main Line Canal, which followed the Juniata River from the Susquehanna River west to Hollidaysburg, transformed these largely self-sustained settlements into communities that were economically grounded in industry and transportation. Iron production, already an established local industry, increased profoundly with improved accessibility to markets. The iron became commonly known as "Juniata" iron. Communities along the Juniata blossomed with their new accessibility and opportunity for transporting goods to major marketplaces. Mining and industry prospered. The Mount Etna iron furnace and other Juniata River area furnaces enjoyed previously unmatched prosperity. Besides Huntingdon, towns like Newton, Hamilton, Mount Union, Mill Creek, and Petersburg became important warehousing, milling, and passenger centers. In 1834, Hollidaysburg, at the western terminus of the canal, became a fixture on the line; between 1831 and 184 its population grew from 72 to 300. Other town populations also increased. When the canal closed, replaced by the Pennsylvania Railroad that was completed in 1850, some communities were bypassed and their economies suffered. Communities that were not bypassed continued to grow and prosper.

When iron production in the Juniata valley declined in the 1870s because of competition from modern furnaces in Pittsburgh, other industries took over. Limestone quarrying and processing operations increased, as did coal mining and sand quarrying. This period saw the rise of the East Broad Top coalfield as a major extractive industry, Some towns, like Mount Union, turned to silica brick manufacturing based on their proximity to available resources. By the late 1800s brickmaking had become a primary industry; this and related extractive industries became dominant throughout the corridor, particularly in the Mount Union, Huntingdon, Alexandria, and Williamsburg areas.