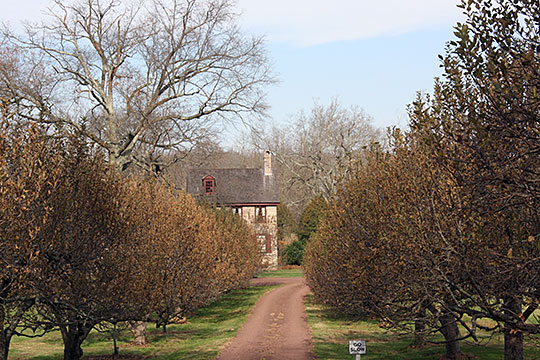 Burgess Lea (The Isaiah Paxson Farm) was listed on the National Register of Historic Places in 1984. Portions of the content on this web page were adapted from a copy of the original nomination document. [‡]

The Isaiah Paxson Farm is both historically and architecturally significant. The farm complex is the epitome of the vernacular early Federal farm in central Bucks County illustrating the highest degree to which domestic building forms and techniques were taken to create a formal country farm. The farm complex is uniquely preserved with the high quality of the house representing the prominence of Isaiah Paxson in his community and the existence of a large complement of late 18th century outbuildings presenting an excellent picture of agrarian life in the region.

The farm complex with its house and seven stone buildings documents farm building use and arrangement commonly used in the English-settled portion of central Bucks County. The complex has the traditional alignment of outbuildings along a common axis, orientation of the primary house facade and barnyard to the south, and the proximity of the domestic service buildings to the house. The spring house is near the kitchen door and the stone walled kitchen garden with the smokehouse in one corner is behind the house. The barn, also, has a stonewalled barnyard with a small service building in one corner. Overall the buildings are very well preserved, of traditional form and show fine workmanship. The existence of stone secondary outbuildings, although not being used for their original purpose, is rare and valuable.

The house is architecturally significant in its own right. Traditionally Georgian is the three-bay, side hall double parlor plan, the pent eaves, pediments and other classical woodwork details. However, the overall proportions, the proportions of some of the architectural motifs and details such as the jack arches with raised keystones, the elliptical transom windows, and ears on the architraves show the emergence of the Federal style. Particularly noteworthy and unusually formal for a farmhouse of this area is the raised first or main level, approached by handsomely proportioned cut stone steps, can be traced to the classic "piano nobile." The pedimented parlor doors off the main hall recall the grandeur of one of Philadelphia's finest mansions, Mount Pleasant. Continuing the spirit of elegance are the full paneled end or fireplace walls in both downstairs parlors and upstairs chambers. The paneling is well balanced and arranged and complemented by deeply carved cornices. The front parlor displays open, arched china cabinets with butterfly shelves and decorative keystones. Further emphasizing the formality of the main section is the austere simplicity of the kitchen dependency wing.

The history of this tract of land is exceptional in that until the present owners purchased the property it had been in the tenure of only two families since 1689. The original purchaser of the property was Richard Burgess, son-in-law of Henry Paxson. Following the deaths of Richard and Elizabet Paxson Burgess the property was devised to Henry Paxson. The property remained with the Paxson family until sold to John Johnson and John L. Johnson in 1814 following the death of Isaiah Paxon. The property then stayed with the Johnson family until purchased by the present owners in 1978.

Isaiah Paxon came into title of the property at the death of his father Thomas in 1782. He was married at that time, but concrete evidence of buildings on the property does not appear until 1784, when one dwelling house and two other outhouses are listed among Isaiah's taxable property. The datestone reading "1785" may, therefor, accurately document the completion of the construction of the house under the direction of Isaiah and his wife Mary.

Isaiah Paxson was a gentleman farmer and astute entrepreneur. His holdings included not only his homestead farm of over two hundred acres, but also a large farm across the Delaware River in New Jersey. He was involved in many commercial activities. Taking advantage of the Delaware River, Paxson built a combination grist and saw mill (no longer standing by the 1830s) for grinding grain, cutting lumber and manufacturing sashes and shutters on his farm in 1804-1805. He had financial interest in the Prime Hope Mills south of Lambertville, New Jersey. The importance of the mills to the region is evidenced by the fact that in November 1806 there was a petition for a road to be laid out from central Solebury to Isaiah Paxson's gate. From this point there was a private road through his land leading to two separate rive landings near the mill.

In addition to the mill operation Paxson had part interest in a large shad fishery along the riverbank. As a separate venture, or perhaps to aid in the transporting of grain or shad, Isaiah Paxson had a cooper shop making his own barrels on the premises. Isaiah Paxson was also a partner in the company organized to build a bridge across the Delaware River for which the village of Center Bridge takes its name, although he died before it was built. The record of his ownership of a carriage shed at the Solebury Meeting House, a riding chair and similar listings in his estate adjudication testify to Isaiah Paxson's wealth and social standing.

The stately house and property seem to be an accurate reflection of the man who built them. Isaiah Paxson, born to one of the leading families of the region, and successful in his own right, was a man of culture and diverse interests.