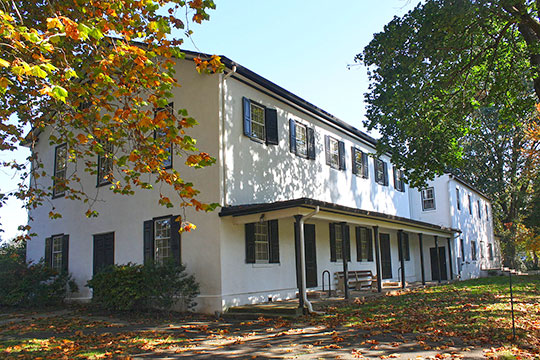 The Newtown Friends Meeting [1] was listed on the National Register of Historic Places in 1977.

Newtown Monthly Meeting owes its origin to Edward Hicks, a primitive artist, who in 1815 gathered nearby friends to meet in the empty Court House, Newtown. In 1817 the main part of the meetinghouse was built, permission having been granted by the Bucks Quarterly Meeting of Friends at the earnest request of Edward Hicks and other Newtown Friends. Edward Hicks was the first minister to speak in the meetinghouse. First a sign painter, Edward Hicks turned to easel painting soon after his becoming a Quaker and his move to Newtown. His fame as a primitive painter grew during his years at Newtown; many of his pictures were portraits of religious themes and the founding of "A Peaceable Kingdom: by William Penn in the wilderness. The involvement of Edward Hicks at the Newtown congregation and his guiding influence make the Newtown meetinghouse an important part of his life and work.