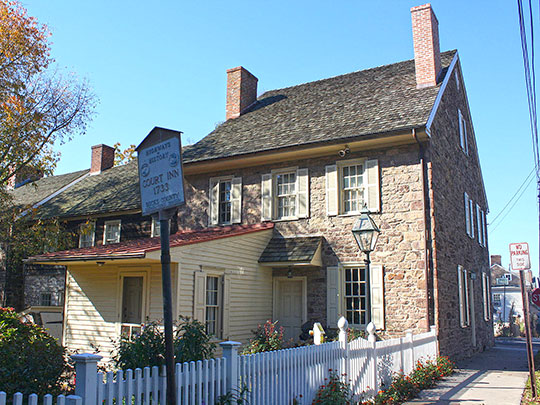 The Half-Moon Inn [1] was listed on the National Register of Historic Places in 1977.

The Half-Moon Inn is located on the southeast corner of Court Street and Centre Avenue, diagonally across the street from what was the Bucks County Courthouse from 1725-1813.

In 1725 when the Bucks County Courthouse was to be moved from Bristol to Newtown, five acres of land was purchased from John Walley to be used for the public buildings. These five acres were divided into 6 lots, the first of which was reserved for the courthouse and jail. The rest were laid out in lots and streets and put up for sale. The first recorded parcel was sold to Joseph Thornton on March 16, 1733. At the time of the purchase Joseph Thornton was reputed to have lived on the site for 8 years prior to his purchase and was listed as an Innkeeper on the deed in 1733. He also paid rent to John Walley for the Red Lyon Inn during 1733 and part of 1734. It therefore appears likely that Joseph Thornton had a small residence on his lot while operating the Red Lyon down the street, and opened an inn of his own shortly thereafter. Joseph Thornton continued operation of their Half-Moon Inn until 1795. The buildings were then sold to various owners and operated as a tavern until 1818.

The Half-Moon Inn building is interesting in its gradual growth from 1733 until 1792. Operating as an inn for approximately 85 years it was an important social center for the community, particularly during the years Newtown was the county seat. Several alterations have been made to the structure but all prior to 1800. The larger section of the inn was restored in 1965 and its 1700's appearance and plans are being made to restore the remaining section.

The Half-Moon Inn building is an excellent example of a composite structure of the 1700's. Architecturally the building is a fine example of a functional colonial style. And the use of stone and Flemish bond brickwork make the building attractive in appearance, and identify its importance n the public center of 18th century Newtown. [1]