Photo: Fonthill Castle was the home of the archaeologist and tile maker Henry Chapman Mercer. Built between 1908 and 1912, it is an early example of poured-in-place concrete and features 44 rooms, over 200 windows, 18 fireplaces, 10 bathrooms and one powder room. Photo by wikipedia username: Frederikto, 2010, creative commons [CC BY-SA 3.0], accessed December, 2019. 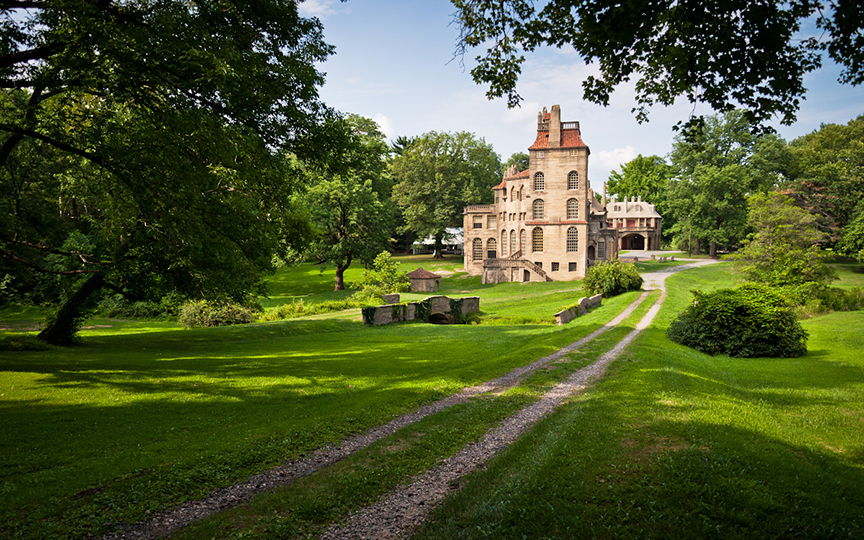 Fonthill [†] was listed on the National Register of Historic Places in 1972.

Together with the Mercer Museum and the Moravian Pottery and Tileworks, these properties are often referred to as "The Mercer Mile."

Fonthill, the home of Dr. Henry C. Mercer, defies any classification or categorization into architectural styles or modes. The reason for this is given by Dr. Mercer in the notes on building his house. "The house was planned by me, room by room, entirely, from the interior, the exterior not being considered until all the rooms had been imagined and sketched, after which blocks of clay representing the rooms were piled on a table, set together and modelled into a general outline. After a good many changes in the profile of the tower, roofs, etc., a plater of paris model was made to scale, and used until the building was completed."

With this explanation, it becomes clear why Fonthill is in the shape and style that it now bears. The buildings of this estate are made of reinforced concrete with red tiles covering the roofs of some of the buildings. The buildings are a conglomeration of styles and innovations molded together in a concrete body. Roof pitch, windows, dormers, chimneys, exterior wall design, and overhung roof all vary with the only constant being the concrete shell. The only resemblance of any existing structure that the Mercer Mansion bears would be to a medieval castle, and thus the building is sometimes referred to as "The Castle."

Within the estate of Fonthill are the following buildings:

The present appearance remains unchanged since the death of Dr. Mercer in 1930. It has been passed down to the present time in the terms of Mercer's will to be a museum of tiles and decorative art.

Fonthill gains its fame for several reasons. It was the home of the noted archeologist and anthropologist, Dr. Henry C. Mercer. Mercer is noted for his collection of rapidly vanishing artifacts of the pre-industrial Pennsylvania crafts and household utensils. Mercer is also noted for his work with tiles. His tiles have decorated the Casino at Monte Carlo, the State Capitol at Harrisburg, the Boston Museum of Fine Arts and other lesser buildings and homes throughout the United States, especially in the northeast. Mercer is renowned for his books on iron, archeological digs, and anthropology. His tiles won him a gold medal at the 1904 St. Louis Exhibition.

The estate of Fonthill is one of the pioneer examples of using reinforced concrete as a building medium. At the same time of its building, Fonthill was thought to be structurally unstable by some architects.

Fonthill is described by Dr. Mercer as coming from various sources, some of which are Byzantine Churches in Greece, Mount St. Michel in France, a Turkish house in Salonica and the paintings of Gerard Dow "Dutch Housekeeper," Wouverman's "Great Barn," De Boucourt's "Le Main Chaud," and a woodcut by the name of "Haunted" in a story called "A Stable for Nightmares."

Mercer has been described as a an of unbending hostility to ugliness and false taste; who possessed the spirit of the craftsman of the past." Fonthill was built with the maxim of Pugin: "Decorate construction, but never construct decoration."

† Portions of the content of this web page were adapted from a copy of the original National Register nomination document.