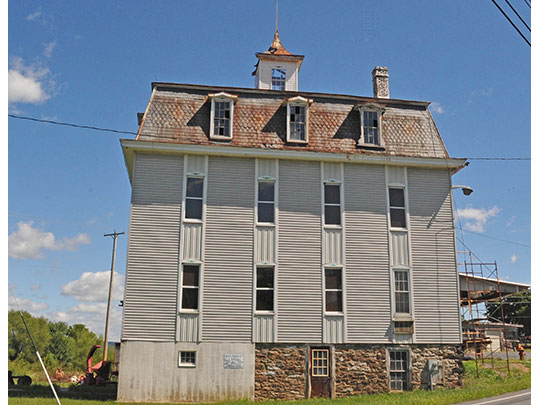 Spannuth Mill was entered onto the National Register of Historic Places in 1990. Portions of the text, below, were adapted from a copy of the original nomination document submitted to the National Park Service; prepared by Louise Emery from the Berks County Conservancy.

The Spannuth Mill is located near the western boundary of Bethel Township at the point where two small streams, Hummeis and Leshes Creeks, converge to form the Crosskill Creek. The mill is east of Crosskill Creek and north of Frystown Road. The two historic resources on the property consist of two contributing buildings, a Second Empire style c 1891, frame, three stories plus basement mill measuring 40'4" by 42' 9" with a 50' extension on the north side, and c 1910 one story building of brick construction adjacent to the mill. The resources have few changes that interfere with their ability to depict the significant time period.

The foundation of the mill is stone, while the upper sections are of frame construction, covered with tin sheathing in a simulated brick pattern. The building is distinctive for its mansard roof design and its attractive Victorian detailing. The mansard roof features gabled dormers and has fishscale slate on its more vertical slopes. A well proportioned cupola at the center of the roof features a pointed spire and windows on each side. All the windows in the mill including those in the cupola and dormers have arched lintels with cutout scroll decoration.

The interior of the mill is intact as an operating mill of the mid 1980's, with office, floor plan, and equipment in place. The mill is structurally strong, built to carry the weights that would be expected when fully loaded on the various floor levels. There is evidence of several posts having chamfered corners but the summer beams are built up of 3" x 12' timbers. The floor joists are dimensional sawn material approximately 3" x 12". The flooring is tongue-and-groove throughout. There is an office in the southwest corner of the mill. There are numerous wooden bins, floor to ceiling throughout to contain the grains and products in their various forms. The mill does not appear to have been altered to any great extent to contain the current machinery. The building is in good structural condition.

This mill is powered by electric motors. There are no millstones or evidence of them. The milling machinery is roller mill machinery and consists of two Midget Marvel Hills manufactured by the Anglo-American Mill Co. of Owensburg, Kentucky. Each is a 50 barrel mill, the earliest patent dated September 25, 1908 and the latest, November 23, 1915. These patent dates suggest that the mills could not have been installed when the mill was rebuilt in 1891 after the fire and must have been later additions. The two Midget Marvels are powered by their own individual electric motors. Also on this floor is a Sprout-Waldron attrition mill driven by two individual Westinghouse motors.

On the first floor near the Midget Marvel mills is a Eureka double wheat scourer powered from the shaft in the basement which has a large electric motor. There is also a Monarch bag packer E-88. From the two roller mills the flour is taken to the attic area by elevator, where it is discharged into a gyro-whip finishing sifter manufactured by the Richmond Manufacturing Company, Lockport, N.Y. This is a twentieth century machine which has its own motor. Other equipment on this floor are an entoleter, which is a modern 20th century machine used to break up grains of bug-infested wheat, and a wire reel machine made by Wolfe of Chambersburg. Inside the front door on the east side of the mill is a Fairbanks scale with two cast-iron reeded columns.

There is a modern flat belt driven cob breaker in the basement, made by the Nichol Engineering Co. of Saginaw, Michigan. The breaker broke up ear corn before it went into the attrition mill. There is a Sprout-Waldron Monarch corn cracker and grading outfit. The corn cracking machine cracked shelled corn for chicken feed called "Scratch". In the addition to the north are two vertical dry feed mixing machines and a molasses mixing machine. All the machines necessary for the feed production and operation of a mill are intact.

The Spannuth Mill is basically intact, although, there have been several additions to the building. There is a 50', single story, flat roofed addition on the north side. The two windows in the addition reproduce the Victorian detailing on the main part of the mill. The second floor west side has a short eight foot extension with a shed roof, again with the windows reproducing the Victorian scrollwork. A shed type roof was added over the main entrance to the mill. The structure of the interior has been little altered, having only those changes necessary to install new milling machinery. However, none of these changes interfere with the identity or change the character of the mill as it was built --a Second Empire style late Victorian mill building. These changes do not interfere with the essential physical features that enable the historic resources to convey their past identity and character and portray the significant time period c 1891 to 1939.

The Spannuth Mill is important for its association with the county gristmill industry as it is representative of the large, late nineteenth century and early twentieth century mills built specifically as roller mills. Architecturally, the mill is a good example of late, high style Victorian mill architecture.

Less than 10 of the 104 mills in the Berks County Gristmill Survey can be described as utilizing high style detailing and period architecture. Mr Solomon Rhoads (The Weidner Mill) in Amity Township and Mr. Wertz in Wernersville are two other owners who decided, when building their mills, to use Victorian style detailing in their buildings. The vast majority of the mills in the survey were utilitarian, vernacular type buildings with little or no embellishments. This mill typifies the Second Empire style with a Mansard roof featuring decorative fishscale slate shingles, projecting gabled dormers and a cupola with spire. All of the windows have arched lintels with detail scrollwork. The brick-like tin covering is of interest and one-of-a-kind in the survey. Rather than rebuild his mill in the traditional vernacular gristmill design after the fire in 1891, Mr. Spannuth chose to emulate the modern Victorian period innovations, making it certainly one of the most stylish buildings in rural Bethel Township in the 1890s.

The Spannuth Mill contributes to our knowledge of Berks County milling history and technology by depicting the use of early twentieth century milling equipment. It produced flour by use of Midget Marvel mills which were a form of mill invented in England and manufactured in large numbers in the United States. They are so-called "self-contained mills" in that practically all the machinery needed to produce white wheat flour is contained within each individual cast iron box. Of additional interest is the use of individual electric motors throughout the mill which is the system to which modern mills eventually turned. Many of the motors used in this mill are of apparently early date for electricity.

This has been an important mill site in Berks County since 1756. According to Berks County historian Morton Montgomery (1886). Abraham Newcomet built a mill here soon after the settlement of the township. The 1816, 1854, and 1862 maps show the mill as being owned by the Newcomet family. The 1850 census of manufacturing shows the owner as Jacob Newcomet, the mill having four pair of stones processing 8,500 bushels of wheat and rye with a product value of $7,070. Two men ran the mill each earning $15 a month. In 1848, a post office was established at the mill which was known as "Crosskill Mills".

In the 1870s, Emmanuel Spannuth became the owner and proprietor. Spannuth was the first miller in Western Berks County to use the roller process to produce a finer grade of flour. The mill was well-known for its Crosskill Mills White Foam Flour. The original mill built in the 18th century was damaged by fire in 1891, and rebuilt the same year with a mansard roof.

Around 1900, the Showers brothers from Bernville used this mill to bring electric power to rural Western Berks. They connected a generator to the mill wheel and when the water wasn't being used to run the mill it was generating electricity for the local electric lines.

Aquillas Alexander Spannuth, son of Emmanuel, took over the operation of the mill in 1906 and continued until 1933. At this time, the mill was completely run by electric motors. George and Roy Spannuth, sons of Aquillas, carried on the work until Roy died in 1956. George continued until 1959 then ownership was passed on to his nephews, Clarence and Roy Spannuth Jr. The last miller was Clarence Spannuth, and he ran the mill with the help of six employees. In addition, to the gristmill the Spannuth family at various times operated a cider mill and creamery on the property. The mill ceased operating in 1982 when Mr. Spannuth retired, marking the end of milling at this location by the Newcomet and Spannuth families, two prominent milling families of Berks County.

This mill has played a key role in the life of the residents of the area for many years. In addition to doing a large merchant business, the mill also ground grain for the local farmers and provided other services by housing the local post office and generating electricity. The Spannuth Mill is an important part of the history of milling in Berks County.