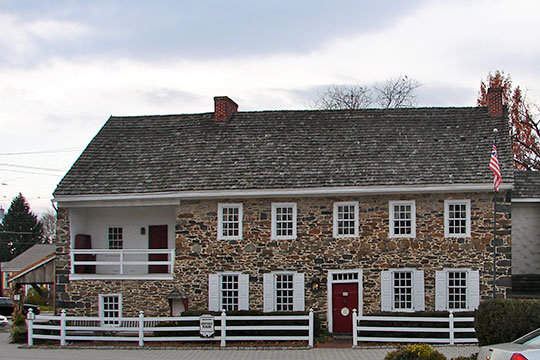 The Dobbin House (89 Steinwehr Ave.) was listed on the National Register of Historic Places in 1973. Portions of the content on this web page were adapted from a copy of the original nomination document. [1]

The Dobbin House was built in 1776 by the Rev. Alexander Dobbin on a 300 acre tract purchased two years earlier. It is a 2 1/2 story stone gable roof structure, seven bays across and two rooms deep with a medium pitched roof. It contains two brick chimneys, one at each end of the original structure.

The original section of the Dobbin House was five bays across with a six panel door occupying the middle bay. Above the door is a five pane light. Windows of this section were six over nine double hung sash on the first floor and six over six on the second story. Six panel shutters with flat panels were used on the ground floor windows. A box cornice runs the entire length of the house.

On the southern end of the original building was a 1 1/2 story kitchen-spring house. It was built with the house but later possibly about 1810 this section was raised to a height of 2 1/2 stories and placed under the continuous gable roof of the original section. This section is constructed of stone and has a recessed balcony on the second story front.

The Dobbin House contains eleven rooms and one small room accessible by a sliding cupboard. It also contains the original doors, chair rail and banisters. Modifications have been made with regard to rest rooms being added, a fire escape, and the usual utility renovations

The Reverend Alexander Dobbin came to America in 1773 as a missionary for the Reformed Presbytery of Ireland. A year later he purchased a three hundred acre tract south of Gettysburg and by 1776 had built a large substantial stone building. The building served not only as his home but also as a classical academy, a theological seminary and occasionally as a church. Reverend Dobbin's classical academy, in operation from 1788 to 1810, was one of the earliest schools of its kind west of the Susquehanna River. Dobbin was also instrumental in laying out portions of Gettysburg, and for a time served as county commissioner.

The Dobbin House is one of the oldest, still standing in Gettysburg. Its exterior fabric, except for the raising of the kitchen wing roof c.1810, is largely original. The interior has sufficed more serious alterations particularly in the 1940's when it was turned into a museum. The house was turned into a hospital following the Battle of Gettysburg. The Dobbin House is significant not only as one of the few remaining eighteenth century buildings in Gettysburg but also because of the important role it and its builder played in the early educational, religious and political life of the community.