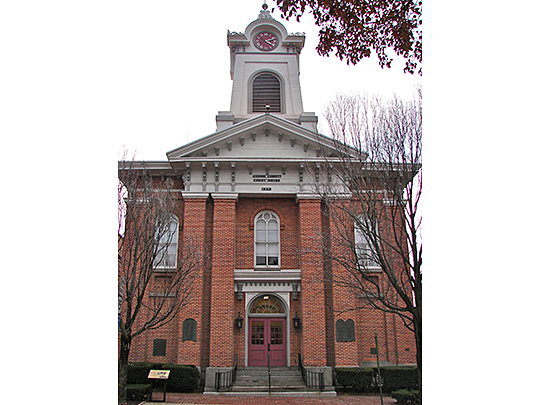 The Adams County Courthouse was listed on the National Register of Historic Places in 1974. Portions of the content on this web page were adapted from a copy of the original nomination document. [1]

The Adams County Courthouse was contracted for in 1858 and completed and ready for occupancy in 1859. The structure was designed by S.D. Button, a Philadelphia architect, and the builder was John R. Turner of Carlisle.

The Adams County Courthouse is a red brick structure, two stories high, three bays wide, and six bays deep. The rear wings, which protrude one bay on either side of the main axis, were added in 1895. The structure is basically Italianate in style with the addition of Classical elements.

The front facade is dominated by a Classical center entrance. The main door architrave features a flush fan transom while the head surround features an entablature with dentils and brackets on either end. On either side of the main doorway are two-story, coupled brick pilasters which support a plain wide entablature. A series of brackets support a triangular pediment above. Brackets extend under the eaves of the flat roof and are emphasized by the broad projection of the roof.

The Adams County Courthouse was originally painted gray; the paint has since been removed. The brickwork and the stonework at ground level have recently been repointed.

As the Adams County Courthouse for one hundred fifteen years (1859-1974), the structure has served as a focal point in the life of the citizen of Adams County.

Shortly after its construction, the building served as both a command post and a hospital during the Battle of Gettysburg in 1863, for both Union and Confederate troops. Casualties continued to occupy the building for a short period immediately following the battle. The clock tower atop the Adams County Courthouse is visible in many contemporary panorama photographs of the town.

Architecturally, the structure is a fine example of Victorian architecture. The Italianate style blended with Classical elements provides the Adams County Courthouse with a stately appearance, appropriate to its role in the political life of the county.