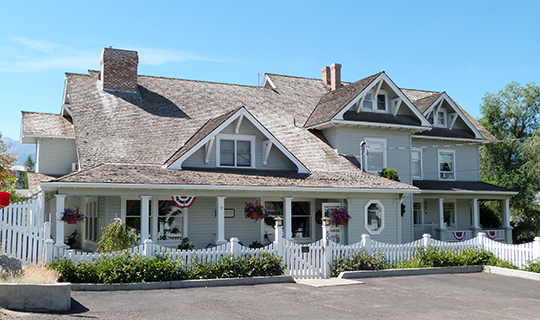 William Bennett, the first white settler in the Enterprise area, arrived in the early 1870's. The area near his cabin was called Bennett Flat and was famed among the stockmen of that pioneer day for two things; a race track for Indians, and a natural roundup center for cattle. Every Sunday when the weather was pleasant, the Indians would gather from far and near to test their ponies on Bennett Flat. The alkali salts and the water of Bennett Flat attracted cattle from far and wide in the hill ranges This brought the cattle in naturally and made it the center of a large stock business. Later, in 1881, Robert Stubblefield, a Missouri sheepherder, filed the first homestead claim on the site of present-day Enterprise.

The establishment of the City of Enterprise was tightly entwined with the battle over which of the county's towns would be the county seat. Although Joseph had been named the temporary county seat in February 1887, the permanent position was to be decided in a later election. Besides Joseph, only Lostine and Alder (now a ghost town) had significant populations, and each was determined to win the coveted position of county seat.

Several Union County business owners, calling themselves the Island City Mercantile and Milling Company, also knew the benefits of being the chosen town. In 1887, they approached first Lostine and then the Joseph leaders about the company constructing a bank, general store, and a flour mill if the town would contribute the land. (Apparently they did not believe that Alder had a good chance of winning the election.) Both refused the proposition, saying that the business owners could afford to buy the land themselves.

Upon their refusal, the leader of the Island City Mercantile and Milling Company reportedly stated that it was obvious his company would just have to build a town of its own. Not long after, Robert Stubblefield and his neighbor, John Zurcher, filed a twenty-one-block plat at Bennett Flat, and called it Wallowa City. Directly in the center of the plat for Wallowa City sat an area designated as the Public Square on land that had been donated by both men. Significantly, Public Square was a term that in the mid-western United States had become synonymous with Courthouse Square. The Missourian Stubblefield and the Ohioan Zurcher thus, perhaps unintentionally, revealed both their heritage and their ambition.

On July 11, 1887, the Island City Mercantile and Milling Company spokesman prepared to make good on his boast to build a town when his company became recipient of an entire block in the choicest section of the proposed town of Wallowa City for a sale price of $1.00. The deeding party bore the name Robert F. Stubblefield. Not surprisingly, a partner in the Island City Mercantile and Milling Company became mayor of the new town.

In a letter printed March 26, 1887, the Joseph correspondent to the Scout reported, "The county seat question is being agitated all over the valley. The fight is mainly between Joseph and Bennett Flat (Wallowa City)." Surprisingly, the contest had apparently dissolved to a choice between the leading town of the valley and a site that was not a town at all. At the time of the correspondence, Bennett Flat had a population consisting of only a few scattered homesteaders. In the general election of 1888, when all the votes had been counted the upstart town of Wallowa City had received affirmation on 482 ballots to Joseph's 370. Wallowa City became the new County seat.

However, postal officials refused to locate a post office in Wallowa City, since a town of Wallowa already existed in the county. According to lore, the local citizens held a meeting, but no names were favored until one participant declared that whatever name they selected, "it ought to be an enterprising little town anyway." Robert Stubblefield proposed the name "Enterprise," which was enthusiastically adopted. On June 14, 1888, the "Town of Enterprise" was filed and recorded.

The City of Enterprise was incorporated on February 21, 1889, by the Oregon Legislature. The first telephone in the town was installed in 1895. And on November 14, 1908, the railroad came through. The arrival of the railroad, relaxed homesteading rules, and general prosperity throughout the nation transformed Wallowa Valley - especially the town of Enterprise. Many of the new buildings were of stone. An article in the May 14, 1910 News Record, just after the completion of the new County Courthouse, described Enterprise as a "Stone City." A significant stimulus to vigorous expansion in the county seat town occurred with the arrival of the Eastern Oregon Lumber Company. In 1915, this Kansas City based firm erected a modern lumber mill within the city limits, built a logging railroad north of town, and began the harvest of a stand of timber that they estimated would keep the mill at full capacity for twenty to thirty years. The operation employed over three hundred men who, along with their families, caused the town's population to more than double in less than a decade.

The opening of the mill in November 1915 triggered the largest building boom in Enterprise History. A good many of the buildings that help define the current skyline date their beginnings from 1916-1917. The infusion of money and population created an illusion that the long-dreamed-of period of continued growth and prosperity had finally arrived. For instance, a local realtor began predicting in his advertisements that Enterprise would achieve a population of 5000 within five years while one of the building projects launched at this time was billed as the largest retail building between Boise and Portland. The laying of the cornerstone for this ambitious construction effort in particular seemed an affirmation to the promising future that beckoned. Intended to house the Enterprise Mercantile and Milling company's modern new department store, the massive three story stone structure covered most of one block and quickly became a matter of civic pride. Town boosters could not have conceived a more appropriate symbol for the optimism permeating the community. Actual completion of the building had been delayed by the war so initial occupancy did not occur until 1922. Three years later the firm found itself forced into involuntary bankruptcy.

Towards the end of the expansionist years in Enterprise, when prosperity seemed assured, a special election was held in March 1919, passing a ballot measure establishing that the city would be responsible for paving the public areas, such as street corners, but property owners would be assessed to pay for the paving of the separate streets. A Chieftain reporter stated, "The paving already in sight will cost probably $125,000 making this the largest public work ever undertaken in the county."

By the beginning of the Great Depression, Enterprise had lost almost all of the gains in population acquired during the first two decades of the century; the population in 1930 was 1379. This sudden deflation of hopes for a thriving city seemed to prove the death knell of the enterprising spirit that had so characterized the town in its early days. For instance, the physical appearance of the entire downtown business district remains essentially the same today as it was in 1917, the population that reached its nadir in 1930 had only slightly rebounded in the past fifty-odd years, and no new industry has ever replaced the important mill. Today, trade and government are the economic mainstays of the town.