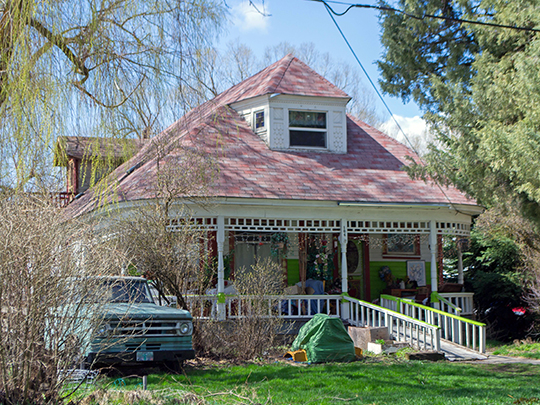 Wallowa County, originally part of Union County, was formally organized in February, 1887. Wallowa County is situated in the northeastern corner of Oregon, bordered by Washington State on the north, and Idaho on the east. The remote county is defined geographically by the natural formations of the Wallowa Mountains on the west and south, the Grande Ronde Canyon on the north, and the Snake River Canyon on the east. These rugged land formations kept Wallowa County fairly isolated, and as a result permanent settlers didn't venture into the area until the 1870's, relatively late as compared to settlement in other parts of Oregon.

At this time of historic contact, the Joseph band of Nez Perce, with a population of 200-300, inhabited Wallowa County. They lived in villages along lower portions of Joseph Creek, the Grande Ronde River, the Imnaha River, and the Snake River during the winter months. In the Spring, family groups moved to camps in the surrounding upland prairies to harvest camas roots and fish from the Wallowa River. As white settlers increased (in 1874 the U.S. Government formally opened the Wallowa Valley to settlement), Indian/White conflicts became increasingly frequent until in 1877, the Nez Perce were asked to leave the valley to be resettled in Idaho. This instigated the Indian War of 1877 when Chief Joseph conducted a retreat of 1400 miles over parts of Idaho, Wyoming and Montana, to finally be forced by the U.S. Army to surrender just 50 miles from their freedom in Canada.

Between 1875 and 1878 a settler named A. C. Smith, a self-educated lawyer, made a significant contribution to transportation to Wallowa County. He built the first toll road over the hill from Cricket Flat, and the first toll bridge across the Wallowa River at Minam, thus greatly improving the connection of the isolated Wallowa area to the Grande Ronde Valley region. By 1879, a stage line into the valley was inaugurated.

The first Wallowa County post office was established in Wallowa in 1874. The first established town in the county was Lostine (1875), followed by the establishment of Joseph in 1879, and Enterprise in 1887. In 1884 the first newspaper was established at Joseph and known as the Wallowa Chieftain, and in 1887 the first bank in the county was chartered. A number of mining claims were filed in 1889, and the city of Wallowa was founded this year. In just 17 years, the population of Wallowa County had grown from 20 families in 1873 to 3,509 people in 1890.

While the population gradually increased in the valley, some settlers began demanding a separation from Union County to the west. In the 1886 election, Frank McCully, a homesteader who had founded the town of Joseph and had advocated independence, won a seat in the legislature. Wallowa Valley citizens had been divided in their votes for the local man, but numerous voters in La Grande and Union, two large Union County towns, reportedly had cast their ballots for him because they did not want to pay for the considerable services, such as roads, soon needed in the valley.

Once in the legislature, McCully astutely became chairman of an influential committee which processed legislation on new counties; by February of 1887, the governor signed the bill creating the Wallowa County. (Wallowa was named after Nez Perce's method of trapping fish with rows of sticks supported by poles stretched across the Wallowa River.) Not surprisingly, McCulley's town - Joseph - was named the temporary county seat.