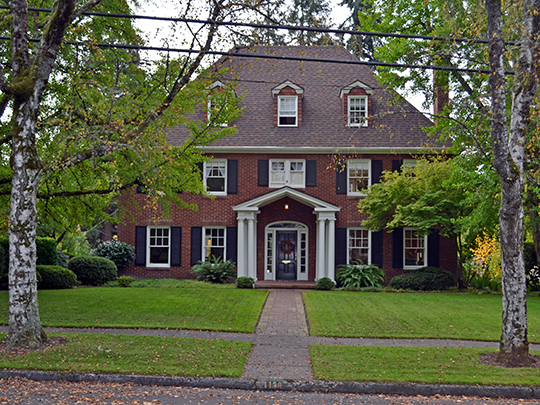 Arriving in the upper valley in 1846, Eugene F. Skinner built a crude log cabin at the foot of a small peak, and there his young wife gave birth to the first white child born in Lane County. Known to the Calapooya Indians as Ya-po-ah, the peak was called by the early settlers Skinner's Butte, and the small settlement that grew up at its base was known as Skinner's. Here the first post office in the region was established in 18853. Skinner's was outside the later corporate limits of Eugene. Judge D. M. Risdon erected the first dwelling within the present limits of the town in 1851. Lane County was created the same year, and several other dwellings and a schoolhouse were erected. James Huddleston opened a store and arriving immigrants cut a millrace and built a sawmill on the river bank. Skinner operated a ferry near the present Ferry Street Bridge, dealt in real estate and, with Judge Risdon, platted a townsite in 1852. Heavy winter rains, however, turned part of the site into a quagmire that earned for it the title of "Skinner's Mudhole." Two fat hogs, trying to root in the mud, are said to have been lost completely. The trend of building then swung toward higher ground. When the town was designated the seat of Lane County in 1853, Skinner and a settler named Charnal Milligan each donated forty acres for county purposes. In recognition of the first settler it was named Eugene City. The first term of the United States district court was held in March, 1852, in a bunkhouse originally built for loggers. Incorporation of the city, "to banish hogs and grog-shops," as one editor put it, was authorized in 1864.

Eugene claimed to be the popular choice for territorial capital in 1856, but there was a dispute over the majority of votes cast. The activity of the settlement, however, induced the Cumberland Presbyterians to build Columbia College in that year. The college building was destroyed by fire of incendiary origin during the first term. It was immediately rebuilt, only to be burned a second time in 1858. Efforts to rebuild it again were abandoned before the third structure was completed. Among the students of this school was Cincinnatus Hiner (Joaquin) Miller, whose father had settled near Eugene. Of this period Miller later wrote: "I have never since found such determined students and omnivorous readers. We had all the books and none of the follies of great centers." He was an outstanding student of Latin and Greek and delivered the valedictory poem (his first in print) at commencement exercises in 1859.

The town had no regularly issued newspaper until New Year's Day, 1862, when the State-Republican began publication. In opposition, secessionist sympathizers founded the Democratic-Register, which Miller purchased and renamed the Eugene City Review. While here he studied law on the side, wrote contributions for his own paper under the name Giles Gaston, sought out another contributor, "Minnie Myrtle," found she was the daughter of Judge Dyer of Port Orford, and, in less than a week married her. Miller was forbidden the use of the mails for his paper on the ground that he was a Southern sympathizer, sold out, bought fruit trees and cattle, and went to Canyon City. Later, while residing in California, he achieved international note as a poet of the Far West.

Early industry of the county centered in agriculture and milling, and the transportation of these products to tidewater markets. The first steamer to ascend the Willamette River to Eugene was the James Clinton, in March, 1857. Although the city was considered the head of navigation, an occasional boat ventured farther upstream. The Relief, according to the first issue of the State-Republican, came up the river from Portland on December 28, 1861, with a cargo of beans and whiskey, and other staple commodities, and tied up at the Eugene wharf. For a few years boats plied between the city and Portland, but water transportation was abandoned after construction, in 1871, of the Oregon & California Railroad.

Shortly after the Civil War Eugene's population increased to 1,200, and the industrial life of the region began to develop rapidly. The University of Oregon was established in 1872 and the first class matriculated in 1876. From the first, wheat had been the chief crop in the county, but fruit growing, dairying, lumber, and mining began to be important elements of the domestic economy. Lumbering, with its sawmills, shingle mills, planing mills, and box factories, has constituted one of the chief sources of income for Eugene citizens. Excelsior is made from the cottonwood and balm trees that flourish along the banks of the Willamette and other valley streams. Mining in the Bonanza and Blue River districts for a time added a romantic element to the industrial life.