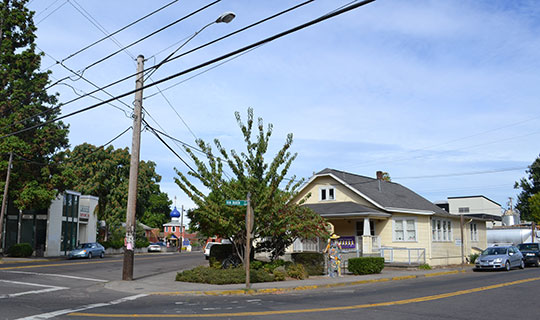 The Residential Architecture in Eugene Oregon, 1850 to 1950, Multiple Property Submission (MPS) was listed on the National Register of Historic Places in 2000. Portions of the content on this web page were adapted from a copy of the original nomination document. [‡]

The Whiteaker neighborhood, named for Oregon's first governor, John Whiteaker, is in large part the site of Eugene Skinner's Donation Land Claim of 1846. The area historically was located between the Willamette River on the north and 8th Avenue on the south and is bounded on the west by Chambers Street and on the southeast by the downtown. It includes Skinner Butte and is nearly bisected by the railroad, which runs from the northwest to the southeast. Blair Boulevard, named for Prior Blair who owned land west of Skinner's DLC, cuts across the southwest portion of the neighborhood. Blair Boulevard was part of the first north/south highway through the Willamette Valley and served as principal entrance into the city. A small commercial district, which developed along this road, was listed on the National Register as the Blair Boulevard Historic Commercial Area in 1993.

Several early additions and subdivisions were platted in this neighborhood. In addition to the Original Plat of Eugene in 1851 (in which the East Skinner Butte district is located) and Skinner's Donation to Eugene in 1853 (which includes a portion of the downtown commercial area), included is Skinner's Addition, which was platted in 1858 and promoted residential development expanded west along 3rd , 4th , 5th and 6th Avenues. The arrival of the railroad in 1871 resulted in the construction of a berm (on which the tracks lay) which helped to control flooding and made further development in the neighborhood possible. Packard's Addition, a large area directly west of Skinner's Addition, was platted in 1871, providing several blocks for residential development. Further development between the railroad and Blair Boulevard occurred with the platting of three more additions between 1884 and 1889. Development on the north side of the railroad, between the railroad and the river, began in 1886 with the platting of Shelton's Addition. Several other additions and subdivisions along both sides of the railroad occurred between 1886 and 1926. Most of the area west of Blair Boulevard was developed after 1906.[*]

Whiteaker includes a wide variety of houses, from small vernacular working class housing to large stately high-style houses. Single family houses were the norm until after World War II when apartment houses became common. Although it began as primarily a residential neighborhood, it evolved into a mix of land uses. The Geary School and later the Whiteaker School provided elementary education for neighborhood children. Two churches were historically located within the neighborhood. Industrial development occurred along the railroad and commercial development along Blair Boulevard.

In addition to the Blair Boulevard Historic Commercial area, there are four individually listed National Register properties located in the Whiteaker neighborhood. These are the Shelton-McMurphy House (located on the south side of Skinner Butte), the Hayse Blacksmith Shop (357 Van Buren), the Baldwin Market (765-781 Monroe), and the James W. Working Flats (614 Lawrence).

The historic character of the neighborhood has been altered over time and continues to be at risk due to ongoing development pressures. Industrial expansion along the railroad and commercial growth along West 6th and 7th Avenues and Blair Boulevard have contributed to the loss of historic resources. The evolution of the 6th and 7th Avenue corridors into major traffic thoroughfares for east-west traffic and the construction of the Washington-Jefferson Street Bridge in the 1980s, which carries traffic from the center of town over the river and connects to the highways, further impacted the historic fabric of the neighborhood. On-going construction of high-density housing also contributes to the loss of historic resources and alters the character of the historic neighborhood.

A number of individual resources in the Whiteaker neighborhood may be eligible for listing on the National Register. There is also a small area west of Blair Boulevard, along West 4th and 5th Avenues, that has been identified as a potential historic district. The area has a significant concentration of 20th Century Period Revival architecture (post-World War I).