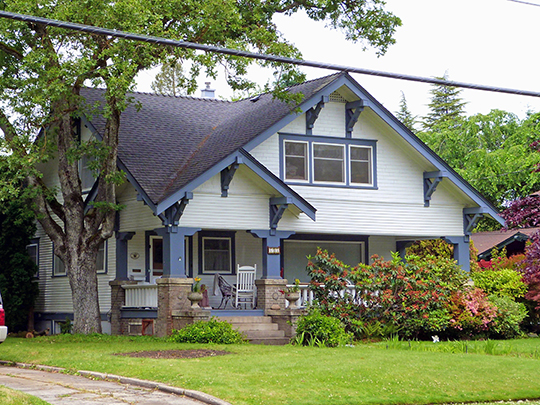 The South Oakdale Historic District was listed on the National Register of Historic Places in 1979. Portions of the content on this web page were adapted from a copy of the original nomination document. [‡]

The South Oakdale Historic District is one of the oldest, relatively intact areas of the town. It contains some of the few remaining early homes of the city, built in the late 1880s to the early 1900s. The men who built these early homes were all key figures in land development of both the residential and business parts of the new town.

One aspect that makes South Oakdale interesting is the development of different popular residential architectural styles over the years. Architect Frank C. Clark designed many of the homes. Clark came to Medford from New York (via California) in the early 1900s.

The development of South Oakdale can be directly attributed to the young men who came to the Rogue Valley in search of wealth as orchardists, many who already had considerable money with which to buy property. The establishment of the first commercial fruit acreage in the Medford area dates to 1885 when J. H. Stewart, a nurseryman from Missouri, and J. D. Whitman, Stewart's friend, came to the valley with their families.

South Oakdale was very socially active in its early years. Residents were active in various city clubs and societies, and many engaged in personal entertaining at their homes. Many of the men belonged to the Rogue River University Club. Begun in 1910 it was a luncheon club and meeting place for men only. The ladies organized the Ladies Improvement Society through which each member gave a tree to be planted in Library Park.

The lives of South Oakdale residents have touched all aspects of life in Medford since its founding in 1883.