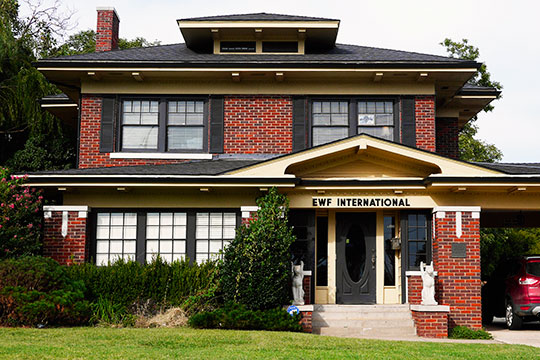 The Maney Historic District (725 NW. 11th St., 1200 and 1224 N. Shartel Ave.) was listed on the National Register of Historic Places in 1979. Portions of the content of this web page were adapted from a copy of the original nomination document. [1]

The Maney Historic District consists of 1-1/2 acres of land with three houses remaining. The district is triangular, with the historic Maney House sitting diagonally facing the intersection of N. Shartel and N.W. 11th street. The Day House, which is the northern-most of the three houses, faces N. Shartel; the Smelser House, which is in the southeastern corner of the district, faces N.W. 11th street. To the north of this district is a modern brick apartment building. To the east is a modern motel to the southeast is a parking lot. And to the south, southwest, and west are modern doctors' buildings. Approaching this district, motorists see an enclave of three old historic homes surrounded by parking lots, motels, and office buildings.

The oldest and most architecturally unique house in the Maney Historic District is the Maney House. Built in 1904 and moved to its present location in 1909, this three story mansion is one of the last Victorian structures in the northwest quadrant of Oklahoma City. The frame structure has a hip roof with three gabled dormers. Under the eaves of the roof are exposed and extended ceiling joists, carved into decorative modillions. The lines of the roof also are softened by three two-story bay windows and one two-story round bay window. The round bay has six windows with curved glass. The other windows of the house have decorative calmes and muntins, while several have stained-glass. A rectangular bay over the front entrance has a Venetian or palladian window on the second floor.

One of the most striking features on the first floor is a round porch extending from the round corner-bay. Supported by Doric unfluted columns, the porch encircles the entire southwest side of the house, connecting with the front extended porch near the entryway. The entryway is framed by beautifully stained and preserved hardwood oak, carved into fluted pilasters. The wooden door frames an elliptical window. This entryway, like the entire exterior of the Maney House, is in excellent condition. The interior also has been renovated to near original condition, complete with massive oak trim and door facings and carved stair bannister and railing.

The Smelser House, built in 1922, is a fine example of bungalow architecture. Although it is two-story, unlike most bungalow houses, the slightly-pitched gables of the Smelser House make the structure a product of that architectural style. Also, the covered carport extending from the house is typical of bungalow style. The exterior of the Smelser House is in excellent condition, and has recently been restored to original condition. The hip roof is in good condition and the trim, with exposed ceiling joists under the eaves, has recently been painted. The interior of the house is partially restored, with most of the fixtures and hardware still in place.

The Day House is a simple two-story frame house. The exterior of the building is in deteriorated condition, in need of partial reconstruction and complete repainting. Many of the windows still have the original glass and calmes, but they too need repair. The building has been altered by the addition of a lean-to room on the south side of the house. Covering the porch, this room is constructed of materials similar to that of the rest of the house. The interior of the Day House also is in need of repair, having been used as a boarding house for the past several years. Hardwood trim, French doors, and a rock fireplace could be restored to original condition with adequate renovation.

The Maney Historic District, with only three houses remaining, is a highly visible legacy of Oklahoma City's transition from a "walking City" to a sprawling suburban community. The two men most important to that development, Anton Classen and James W. Maney, were leaders.whose influence extended to the city, the territory, and the state. Maney's mansion, the heart of the, Maney Historic District is one of the last two ornately designed Victorian mansions in the northwest quadrant of Oklahoma City. Today, the Maney House and its two neighboring structures form an enclave of early residential suburbia amidst encroaching office buildings, concrete apartments, and parking lots.

In 1900, Oklahoma City was a small, company town of approximately 9,000 people. Most of these pioneers lived in the downtown district, for as in many cities on the frontier the lack of inner-city transportation forced people to live near their places of employment. This limitation was eased in 1903 when the Metropolitan Railway Company built the territory's first street car line in Oklahoma City.

One man who foresaw the urban changes attending this transportation revolution was Anton Classen, president of the street car company. A native of Illinois, Classen was an educated man, having written a thesis on land use before earning a law degree. After homesteading in the Unassigned Lands in 1889, he became editor of the first paper in Oklahoma Territory, the Edmond Sun, receiver for the United States Land Office in Oklahoma City, and president of the Oklahoma City Chamber of Commerce.

In 1902, at a time when most affluent residents of the city were building houses in the downtown district east of the Santa Fe tracks, Classen entered the real estate business on the northwest side of town. His first land development was the Classen Marquette Addition, subdivided in 1902. Bounded by Walker Avenue on the east, Western Avenue on the west, Tenth Street on the south, and Thirteenth Street on the north, this rural block of land was isolated from businesses and industries located farther south and east. But, as Ed Overholser described Classen, "His success was due to absolutely correct vision and working toward that vision." In this instance, Classen's vision was a suburban housing addition separated from the noise, congestion, and blight of downtown, yet linked to that district by efficient and affordable transportation. Through his involvement in the Oklahoma Railway Company, street car tracks extended north on Walker Avenue to Thirteenth Street. His vision was materializing.

One of the first and most prominent residents in the addition was James W. Maney. Born to Irish immigrants in 1862, Maney at the age of seventeen began working for the Union Pacific Railroad. By 1884 he had ventured into the railroad contracting business, working in every state and territory in the American West. In 1889, he constructed track into the Indian Territory, beginning a fifty-seven year career in what would be Oklahoma. Involved in the construction of the first railroads into Oklahoma City, Maney was reputed to be "the largest railroad contractor in Oklahoma" by 1900.

In addition to Maney's professional contributions to his city and state, he was involved in civic organizations, especially the Knights of Columbus, a group devoted to the community's welfare. For all of his accomplishments, Maney was inducted into the Oklahoma Hall of Fame in 1936.

Maney also was an extensive property owner, possessing farm land, mills, office buildings, and houses. One of his houses, a 3,600 square foot, Victorian-style mansion, was built in 1904 at 917 N. Robinson in Oklahoma City. By 1909, however, that neighborhood of the city was filling with commercial enterprises, churches, and a large high school. To flee this urban congestion, Maney in 1909 purchased a lot in the Classen Marquette Addition. Instead of abandoning his mansion at 917 N. Robinson, Maney used his engineering skills to move the house one mile to its new rural setting. This move in itself was a noteworthy accomplishment.

With the Maney mansion in the center of the new rural subdivision, and with the street car line offering access to downtown, the Classen Marquette Addition slowly filled with other residents. In 1920, Maney purchased the lot adjacent to his south, only to sell part of it to Anna G. Caffrey in 1922. Caffrey borrowed $5,000 to build a two-story brick mansion. With the construction completed, Caffrey sold the house to Jesse Smelser, who lived in the house until 1955. The lot north of Maney's mansion remained vacant until 1922 when Edna Day built a large two-story frame house. Day remained in the house until 1939, when it was deeded to Kingfisher College in lieu of mortgage requirements. The heirs of James Maney purchased the structure in 1960. The Smelser House had been added to the Maney estate in 1955. Both houses since that time have been used for various purposes, from boarding rooms to an old-folks' home.

Although the Maney, Smelser, and Day houses have remained as private residences to 1978, the district began changing as early as the late 1920s. Today, the three houses are surrounded by a maze of medical towers, parking lots, and multi-unit apartments. The most striking contrasts to the Maney District are the medical buildings, some of which rise ten or more stories.

The medical community developed around St. Anthony's Hospital, which since 1899 had occupied the block between Ninth and Tenth streets, only three blocks east of the Maney House. In 1928 St. Anthony's attracted the district's first privately owned medical complex, the six-story Osler Building. This construction was followed in 1951 with the Pasteur Medical Building, the first such structure in the Classen Marquette Addition. Then, in the 1960s and 1970s several medical towers replaced the residences west of the Maney House. To complete the transformation of the neighborhood, apartments and motels replaced houses to the north and east of the Maney Historic District. Today, the demands for parking lots and space for modern construction threaten the survival of the Maney Mansion and its two neighbors — the last of the old suburban housing addition pioneered by city founder Anton Classen.

The survival of this district is important to the human environment of Oklahoma City, for it is situated at the junction of three major thoroughfares in the downtown area. Shartel Avenue and Classen Boulevard, which intersect near the Maney Historic District, are two of the most heavily traveled streets in Oklahoma City, while Thirteenth Street marks the southern limit of residential neighborhoods on the northwest side of town. To the tens of thousands of people traveling on these streets, the Maney Historic District stands in sharp contrast to the modern concrete and glass medical and apartment buildings.

Today, there are only two ornately designed Victorian mansions in the northwest quadrant of Oklahoma City. One is the Maney House; the other is the Overholser Mansion, admitted to the National Register in 1971. Just as the Overholser Mansion was preserved as representative of Victorian architecture, the Maney House also represents the fine detail and superior craftsmanship of that early architectural style which is disappearing so rapidly from our major cities. In terms of visibility to the public, the Maney House will have a greater impact due to its location.

Concerned citizens already have partially restored the Maney and Smelser houses; however, more work is needed to ensure survival. The Day House remains in dilapidated condition, awaiting restoration. Only inclusion on the National Register of Historic Places will provide the funds and incentives to restore this district to original condition. Without that status, Oklahoma City may lose an important remnant of its past.