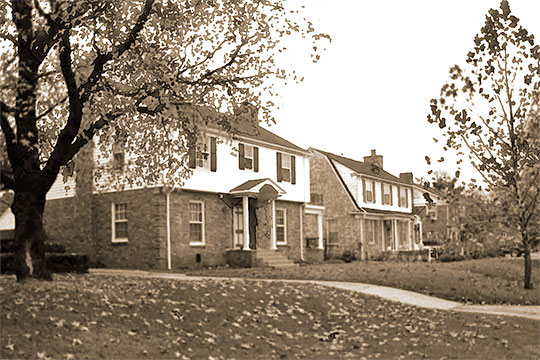 The Crown Heights Historic District was listed on the National Register of Historic Places in 1995. The text below was adapted from a copy of the original nomination document. [1]

Crown Heights Historic District was developed in the 1930's and 1940's three miles north of the Oklahoma City, Oklahoma, central business district and two miles northwest of the state capitol. Located from Northwest 36th to the north side of Northwest 42nd, North Western Avenue to North Walker Avenue, the district is a quarter-square mile in area. Primarily residential, Crown Heights includes 504 buildings, of which 470 are contributing. There are three parks, two of which were established during the neighborhood's development and are contributing sites. A distinctive feature is the length of most blocks, which at about 1300 feet is two or three times longer than the design prevailing at the time. The developer of the neighborhood, G.A. Nichols Inc., also built many of the houses. Houses were required to be brick, brick veneer, stone or stucco. Additionally, each block had different requirements for minimum price and number of stories. The dominant architectural styles are Tudor Revival and Colonial Revival. Other styles found in Crown Heights are Mission/Spanish Colonial Revival, Monterey, Classical Revival, Italian Renaissance, French Eclectic, International, and Minimal Traditional. The two large churches facing Western Avenue were built during the same time that the neighborhood developed. A Mission/Spanish Colonial Revival commercial strip in the southwest corner of the neighborhood was developed concurrently with the neighborhood but has been substantially altered since that time. Another commercial area was constructed in 1944 on the central south end of the neighborhood at Shartel Avenue and Northwest 36th. Most buildings in Crown Heights are in good or excellent condition. Surrounding neighborhoods have developed somewhat sporadically compared to Crown Heights, with older neighborhoods to the south and west and newer development to the north and east; most of those areas are primarily residential development with the exception of limited commercial activities adjacent to the western and southern boundaries of Crown Heights. Throughout and since its development, the Crown Heights Historic District has maintained its historical and architectural integrity.

The District covers twenty blocks, ten of which are double-length and constitute the main body of the neighborhood. In the southeast corner of the district the blocks follow the curved pattern formed by Northwest 36th Terrace, Northwest 37th, and North Lee Avenue. In the southwest corner, there is a small block that was set aside for commercial development. The blocks north of Northwest 42nd, along the northern boundary of the district, are half the depth and length of other blocks in order to match the previously platted addition to the north. Only one street, Shartel Avenue, runs north-south through the entire neighborhood. The Shartel Avenue median, originally constructed with a streetcar line, now is landscaped with trees and park benches; non-original masonry neighborhood signs are at each end. Some of the east-west streets curve slightly; some in order to align at Western Avenue with the older addition to the west and others to parallel the contour of the park in the southeast part of the neighborhood. Overall, however, the neighborhood streets follow the cardinal directions as established years prior by the grid system.

The Crown Heights Historic District is an example of Depression-era residential development in Oklahoma City. It is architecturally significant as an outstanding cohesive example of a 1930's residential neighborhood. The district is a reflection of Oklahoma City's building boom which followed the discovery of the Oklahoma City Oil Field in 1928. During 1931 and 1932 alone sixty-four houses were constructed in the neighborhood. Although the following eighteen months reflect the nationwide near standstill of the construction industry, the establishment of the Federal Housing Administration in 1934 and the availability of home loans provided the impetus for the completion of the addition within a relatively short time. The development of these large and well-built homes during the height of the Great Depression contradicts the myth that the entirety of Oklahoma was covered in dust or undergoing relocation to the West Coast between 1929 and 1941. The Crown Heights Historic District illustrates both the state of the local economy and the popular architectural styles of the 1930's and early 1940's. Its period of significance begins with the opening of the addition in 1930 and ends in 1944, when ninety-five percent of the residences had been built. Only five percent of the properties were built after the onset of U.S. involvement in World War II, including the construction of a prominent shopping center in 1944.