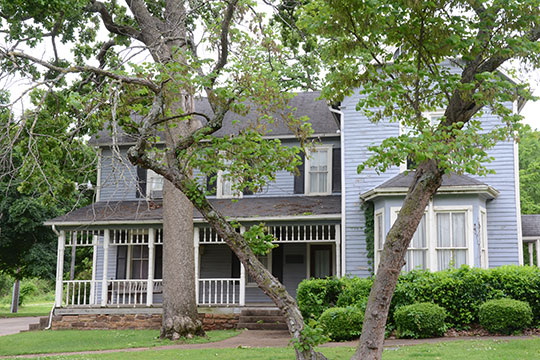 Tahlequah was chosen as the permanent capital of the Cherokee Nation on July 12, 1839, when the East and West Cherokees met at Takotokah, northwest of Tahlequah, and signed the Act of Union. Until 1843, when the present town of Tahlequah was first platted, the capital consisted of a council ground and camping site for the delegates attending the conferences. In that year, three cabins were constructed in which the council, senate, and treasury were housed.

The Intertribal Council of 1843, which was called by the Cherokees and attended by representatives of eighteen tribes, was in session here for four weeks discussing mutual problems arising from the removal of the various tribes from their former homes.

On January 8, 1845, a measure was enacted ordering all houses on the Public Square to be moved before September 1; on their removal, the main streets were laid out and a brick building was erected for the Cherokee Supreme Court. The Cherokee Advocate, official publication of the Cherokee government, was printed here. During a fire in 1874, the old building was partly gutted but was rebuilt shortly after; the Advocate was housed in the Cherokee jail during the interim. Located just across the street from the southeast corner of the public square, the first Supreme Court Building still contains part (mostly the outside walls) of the original materials used in its construction in 1845. In the square also stands the old Cherokee Capitol, completed in 1869. It now serves as the County Courthouse for Cherokee County. West of the courthouse and on the grounds of the old square are Statues of W. P. Adair and Stand Watie, prominent in Cherokee politics and war, respectively.

A present-day hotel, across the street from the courthouse square, is on the site of the National Hotel, erected in 1848 as an inn for the convenience of the representatives attending council sessions. The hotel was built by a Mormon bishop and two of his followers, who arrived here on their way to Texas in 1847. The Mormons were being driven out of the East at that time, but these three men had chosen not to accompany the main body headed for Utah. In Tahlequah, the bishop attempted to carry on his church work but was so deeply resented that he soon left. In another building (immediately across from the north end of the west side of the square), erected in the same year by Mormons, one of the first telephone lines in Oklahoma, from Tahlequah to Fort Gibson, was installed in 1886 by Ed Hicks, a Cherokee who still (1941) lives in Tahlequah.

Down Tahlequah's main thoroughfare, Muskogee Street, in November, 1855, marched the famous Second Cavalry numbering 750 troopers on the way from Jefferson Barracks at St. Louis to Texas, where the regiment was engaged in fighting Indians until the outbreak of the Civil War. In command was Colonel Albert Sidney Johnson. Lieutenant Colonel Robert E. Lee, second in command, had been detained at Leavenworth, Kansas, on court-martial duty and joined the regiment after its arrival in Texas. Among other officers of the regiment were Captain Edmund Kirby Smith, Lieutenant John B. Hood, and Lieutenant J. E. B. Stuart.

In 1851, the Cherokees established two schools of higher learning—one, a Male Seminary just southwest of Tahlequah, and the other, a Female Seminary at Park Hill, approximately four miles south of Tahlequah. Both buildings were destroyed by fire—the school for boys in 1910, and the female institution in 1887. The latter school, relocated at Tahlequah in that year, was purchased in 1909 by the state of Oklahoma to form the nucleus of Northeastern State College. The plant comprises six buildings on a campus of much natural beauty.

A separate building on the grounds houses the Northeastern Historical Museum, in which numerous Indian relics and documents are preserved. Among these are many volumes of the Cherokee Advocate, the national tribal newspaper; leather saddle bags and other effects which belonged to General Stand Watie; a plow and ox yoke brought here by the Cherokees along the Trail of Tears from Georgia; and portraits of Sequoyah and Samuel Houston Mayes, a Cherokee chief. A church bell, reputed to be the oldest in Oklahoma, is also on display.