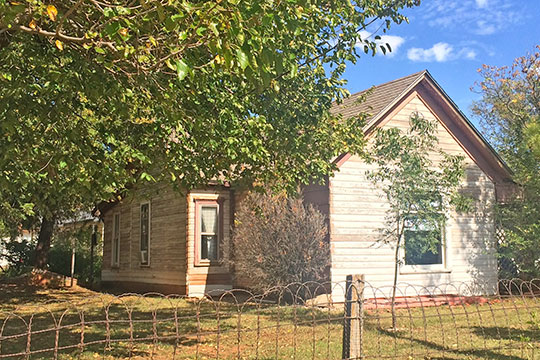 Although the twelve square miles that represent Mustang were not incorporated as a city until October 1969, the history of Mustang can be traced back to the "Great Land Run of 1889." One hundred thirty-six families were among those first "visionaries" to make what was then known as Township 11 North, Range 5 West, their own. It was not until January 1891 that the Canadian County Commission voted to officially name Township 11, "Mustang Township." There is no official record of how Mustang was selected as the name for the township. One theory suggests that the name was taken from the post office, however the post office was not established until 1895. The most generally accepted theory is that the name was suggested by Thomas Addington, the first Canadian County Commissioner from Township 11, because of the proximity of his property to Mustang Creek.

It was not until 1901 that Mustang was finally platted as a town. The town plat was filed by Charles G. Jones, former Oklahoma City Mayor, on November 20, 1901. This plat included 47.65 acres of land, most of the activity being along South Mustang Road, between the railroad tracks and the present State Highway 152.

Several small businesses and the post office were in existence prior to the official plat being filed in 1901. However, when Charles G. Jones opened the Mustang State Bank, a flurry of commercial activity and development began. Doctors' offices, drug stores, general merchandise stores, lumber yards, wagon makers, livery barns, a barber shop, and a fifteen-room hotel were either opened or began operations within the first month after the establishment of the bank. May 16, 1902 was another significant date in the commercial development of Mustang. On that date, the Western Railroad Company opened its depot and the Frisco Railway began passenger and freight service to Mustang. August, 1902 16 brought yet another link to the outside world with the establishment of a telegraph office at the rail depot.

Commercial growth continued between 1902 and 1910. New growth included a cotton gin, meat market, grain elevator and mill, and the Oklahoma Union Overall Company which opened in 1903. The Pioneer Phone Company provided the first phone service to Mustang in 1904. By 1906 there was a growing trend of changing ownership in the existing business community. In 1910 Mustang residents enjoyed the addition of cement sidewalks.

In the early years of Mustang development, agriculture played a significant role in the economic history of the area. It appears that the imagination of the early settlers was the only limitation to the type of agricultural products grown. The area was so fertile, and it produced such an abundance and variety of products, that Mustang became known as "down in Egypt." The Mustang Fruit and Truck Growers Association recognized the economic potential of shipping outside the Oklahoma City area. Produce from Mustang was exhibited at the 1904 World's Fair in St. Louis, winning silver and bronze medals. However, by the 1930s and 1940s, the agricultural emphasis had totally shifted from truck farming to dairy and beef production.

In 1934 Highway 152 was hard surfaced which encouraged additional traffic through Mustang. In 1935 it was officially designated as part of the state highway system. State Highway 152 remains the town's dominant commercial strip.

During the 1950s Mustang continued to grow, but the lack of a substantial tax revenue base, prevented major growth and development. In 1959, substantial growth in the Mustang School District and revenue from OG & E's electric plant, provided for construction of a new high school. The population of Mustang expanded. The escalating population served as motivation for additional economic growth and development which occurred in the following decades.

The "lifestyle" sought by so many since 1960, began in the very early settlement days. It is said that the early settlers of Mustang, were hard working, serious minded individuals who wanted to build a future for themselves and their families. In looking at the community in those early years, we see the desire of the settlers to continue those values and refinements known in their previous homes. As early as 1891 organizations formed to promote community unity, civic activities, and church-related functions. Around 1902 a theater group, "The Dramatic Club," presented its first program. Literary societies provided cultural influence.

In 1906 the first city park was established and citizens displayed community dedication by donating all landscaping. It is obvious that those early day residents of Mustang were "visionaries." They established a legacy of planning for future generations by establishing a quality of life which encouraged family values, concern for the community, education of its children, cultural and recreational activities for all citizens.

Largely driven by the desire to seek a specific "lifestyle" and a "quality" school system, many individuals moved to Mustang from Oklahoma City during the 1960s and 1970s. By the 1980s the Mustang School District had earned an outstanding reputation in the state. The excellent school system, coupled with the rural "quality of life" atmosphere, helped establish the City of Mustang as a prime family residential area. Mustang became an attractive area for families relocating from other states to Oklahoma during the 1980s and 1990s.

Over the decade of the 1990s, Mustang continued to see rapid residential growth. Coupled with growth within Mustang's corporate limits, the western suburbs of Oklahoma City have witnessed rapid residential and commercial growth along the I-40 corridor north of Mustang. In 1998, the Kilpatrick turnpike was opened and with it additional development opportunities in Oklahoma City's western suburbs.

In October 1969 voters approved the Mustang Charter, creating the twelve square mile entity as it now exists. The Charter established the Council/Manager form of government under which Mustang currently operates. In addition to a Mayor, Mustang has six Councilmen representing six wards.