Photo: House in the East Main Street Historic District, Ravenna, OH. The Historic District was listed on the National Register of Historic Places in 1985. Photographed by user:JonRidinger (own work), 2009, [cc-by-3.0 (creativecommons.org/licenses/by/3.0)], via Wikimedia Commons, accessed August, 2013. 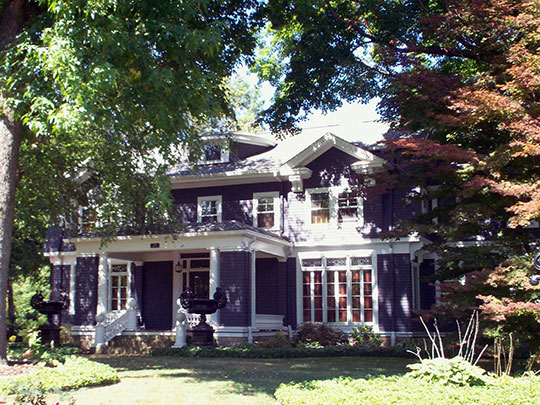 Ravenna, seat of Portage County, lies on a ridge which forms the watershed between the Cuyahoga and Mahoning Rivers. It was named for the Italian city after its settlement in 1799 by Benjamin Tappan, Jr., a native of New England and later U.S. Senator from Ohio. For many years the town grew slowly, but in 1840 the completion of the Pennsylvania and Ohio Canal, a branch of the Ohio and Erie Canal, brought a measure of prosperity to the community. When a railroad between Ravenna and Wellsville opened in 1852, traffic on the canal gradually ceased. Since then Ravenna's growth has been unspectacular but steady. It has numerous small industries which manufacture excavating machinery, iron castings, toys, furniture frames and women's clothing.