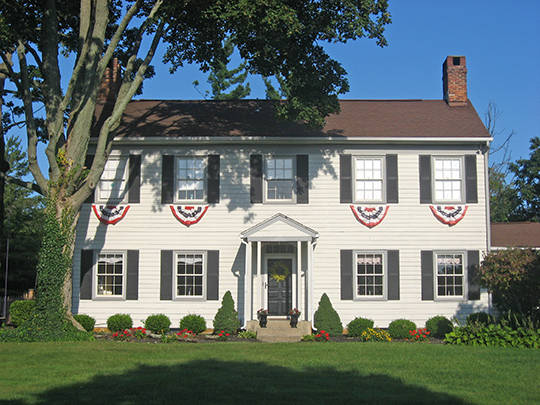 From the time that it was platted in 1839 until about 1960, Westerville indeed was a distinct, self-contained community of northeastern Franklin County. Its rich heritage is derived from its history as an independent farming community and college town, as well as a nationally-known center for the temperance movement of the late 19th and early 20th centuries.

The Westerville area was first settled in 1806 with the arrival of a Connecticut man, Edward Phelps, who purchased 500 acres of land along Alum Creek in Blendon Township. Drawn by the rich farmland, other pioneer families settled here as well. Among them were the Westervelt brothers who arrived from New York State in 1816. The State Road, an early route between Columbus and Mount Vernon (State Street today) became a focal point for travelers and area residents. A hotel and tavern were built in 1836, a general store in 1837, and a Methodist church in 1838. Responding to this activity, Matthew Westervelt laid out a town plat in 1839, with boundaries at Home Street on the north, West Street on the west, Vine Street on the east and Park Street on the south. Included in the original town boundaries was land reserved for the Blendon Young Men's Seminary, a short-lived Methodist school. This school, acquired by the United Brethren Church in 1846, was reopened as Otterbein College in 1847. The fledgling village benefited from the college which contributed to its cultural growth and physical development.

During the 1850s and 1860s, Westerville remained a small but growing community. Some new additions were added to the north, east and west of the original plat. Among the new buildings constructed at that time was the Stoner House, still standing at 133 South State Street, built c. 1852 as a tavern, stagecoach stop, and hotel. It also served, according to local history, as a stop on the Underground Railroad. Other early buildings were less substantial, mostly built of frame. State Street contained a mixture of small-scale commercial buildings and residential structures. Other farmhouses and homes for merchants were in scattered locations along the village streets. In 1860, Westerville had 275 residents, a population that was doubled when the college was in session. The combined population stood at 871 in 1870, mostly made up of shopkeepers, clerks, farmers and students. In the years following the Civil War, Westerville experienced a number of changes. A significant event was the arrival of the first railroad train from Columbus in 1873. This connection with the capital city enabled Westerville to grow more rapidly than ever before. Substantial three-story brick commercial buildings were built on State Street to cater to this trade. A reporter in 1875 found Westerville to be a cozy, pleasant village within 30 minutes of Columbus by train. He noted that new streets had recently been opened and new buildings constructed, including a town hall and four-room Union school. The State Street commercial area housed a variety of merchants who served the needs of local residents and catered to railroad traffic. Residents were building attractive brick or frame homes on the main street or side streets. The village's first annexation ordinance was passed in 1872, extending the village limits north to County Line Road and southeast to the fairgrounds.

One of the pivotal events in local history was Westerville's Whiskey War of 1875, centered around the opening of Henry Corbin's saloon. Westerville's long and colorful temperance history had begun in 1858 with passage of a law banning the local sale of "fermented spirits." The target of many demonstrations, Corbin did not prevail in the whiskey war, although his rebuilt saloon remains standing at 39 West Main Street.

During the 1880s, with a population of 1,200, Westerville gained telephone service, a hook-and-ladder company, gas street lamps, and its first bank, the Bank of Westerville. Small manufacturing interests contributed to the town's economy, including an iron foundry, broom factory and tile manufacturer. The village prided itself on being the home of Otterbein College, a respected educational institution. Important brick buildings continued to be built on State Street, including the Weyant Block, Markley Block, Homes Hotel, and a new Methodist Church. The third floor of the Weyant Block was an opera house used for plays, lectures, "hops," and roller skating. The waning years of the 19th century brought a number of improvements to Westerville which enhanced its status. The decade of the 1890s brought electric street lights and electric streetcar service to the community, via the Columbus and Westerville Railway Company. The Vine Street School (now Emerson School) was built to replace the earlier Union school building. The village had a bustling commercial district on State Street, pleasant homes on many side streets, and the attractive buildings of Otterbein College. Even so, its streets remained unpaved.

In 1900, Westerville was described as a quiet and peaceful village, populated by modest and industrious people. In 1901, its voters passed bond issues which gave them a new waterworks, sewage plant and, for the first time, paved streets. (The streets were paved with brick between 1903 and 1910.) A significant event in community history occurred in 1909 when the Anti-Saloon league, a temperance organization based in Washington, D.C., relocated its national headquarters to Westerville. (An active local chapter had been here since 1894.) Activities of the Anti-Saloon League earned Westerville the nickname "Dry Capital of the World." The large volume of promotional material produced by the League also resulted in Westerville's designation as a first-class post office in 1912. The headquarters of the Anti-Saloon League still stands at the Westerville Public Library and today houses an exhibit devoted to this important piece of local history. The period from 1900 to 1920 was a period of economic growth in Westerville, helped along by the publishing activities of the Anti-Saloon League. New banking institutions included the First National Bank in 1905 and the Home Savings Company in 1911. The Winter Garden, Westerville's first motion picture theater, opened with 180 seats in 1913. The Westerville Creamery, established in 1900, built a new plant in 1916. The Kilgore Manufacturing Company moved to Westerville from Columbus in 1918, bringing jobs for 175 employees in the production of children's cap pistols. New churches and homes were built to serve the growing population, which had increased to 2,400 by 1920.

In 1924, the 3-C Highway was completed through Westerville (State Street) bringing a significant amount of automobile traffic through the town. The impact of the automobile was seen in the community as service stations, dealerships and auto repair facilities were constructed. The first traffic light in Westerville was installed at the intersection of State and Main Streets in 1926. Constructed during the 1920s were the State Theater and the new High School (now Hanby School). During the Great Depression, Westerville adapted to changing times but remained a secure, close-knit community. Federal programs such as the WPA contributed to the construction of parks, the post office, and the municipal building. Village offices and the first public library were located in a former State Street residence that was purchased with WPA funds in 1933. During the 1940s, with improvements in automobile transportation, some Westerville residents began to commute to Columbus for jobs, starting a trend that would greatly accelerate during the 1950s and 1960s. By 1950, the village's population had reached 4,100; a number that would swell to 7,000 just 10 years later. Westerville became a city in 1961.