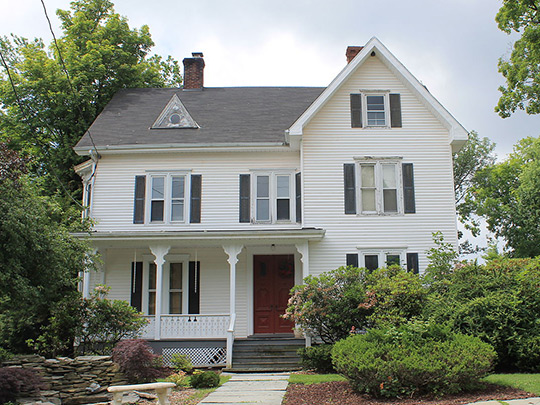 Monticello, the Sullivan County seat, is located in the south-central section of the county. This area, in the town of Thompson, lies within the Hardenburgh Patent, a large expanse of land, generally between the Rondout and Delaware River valleys, that was granted to Major Johannes Hardenburgh in 1707. The village owes its existence to a pair of New Englanders. Brothers Samuel Frisbee Jones and John Paul Jones were born in Litchfield, Connecticut and raised in Lebanon, Columbia County, near the eastern border of New York State. The Jones became interested in Sullivan County after the Newburgh-Cochecton Turnpike was chartered in 1801. Samuel F. Jones recognized the potential for development and economic opportunities along the turnpike, which would greatly increase access to the interior of the county, and purchased more than fourteen hundred acres of land along what he believed would be its most likely route. Jones then exerted his considerable influence to ensure that the turnpike was routed through his land. Arriving in 1803, before the route was finalized, John P. Jones constructed a sawmill and gristmill and began clearing lots for the village. The brothers had definite ideas about the future of the new village (which they named to express their admiration for Thomas Jefferson) and even before the land was cleared, the founders had selected a site for a public square and a county courthouse. After surveying the streets, the Joneses advertised widely throughout the Hudson Valley, offering village lots to merchants and tradespeople who would agree to settle on them. Over the next decade, Samuel Jones was single-minded in pursuing the designation of Monticello as the county seat, which occurred in 1809, the same year that the turnpike was completed. [‡ Quinlan 98-01].

The village developed as a prosperous mercantile community. By 1820, Monticello was one of the county's principal settlements. Over the next fifty years, the village continued to grow as a commercial and government center. However, when the New York and Oswego Railroad, which brought multitudes of nineteenth-century and twentieth-century tourists to the western Catskills region, push through Sullivan County in the 1870s, the citizens of Monticello objected to the unpleasant side effects of the railroad and it was re-routed to the north. Although the village officials acted quickly to rectify their mistake by establishing connections via branch railroads, Monticello never enjoyed the enormous benefits from the railroad that other Sullivan County communities did, and the village's economy remained dependent on its role in business and government