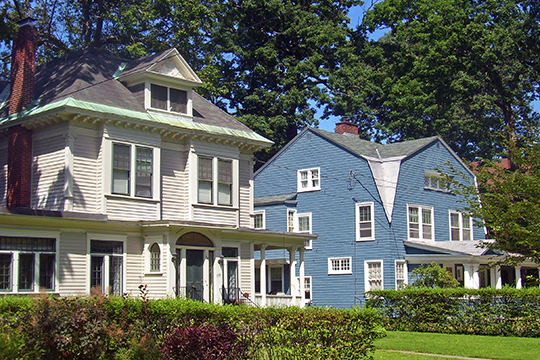 The General Electric Realty Plot Historic District was listed on the National Register of Historic Places in 1980. Portions of the content on this web page were adapted from a copy of the original nomination document. [‡]

The General Electric Realty Plot is located atop the Union Street Hill, directly east of the Union College campus in the northeastern section of the City of Schenectady, New York. The neighborhood is approximately ninety acres in area and contains ten tree-lined streets. A ravine thirty feet deep and one hundred feet across, with a stream, cuts through the center of the area. Four arched bridges, constructed of Duanesburg blue stone, span the ravine. All lots are a minimum of seventy by one hundred and forty feet, and houses are set back at least thirty-five to fifty feet from the property lines.

The neighborhood contains approximately one hundred structures, most of which were constructed from 1900 to 1927. Each house was constructed as a single family home and all are extremely large. Georgian and Colonial Revival are predominant designs, and there are good examples of Queen Anne, Shingle, and Mission styles.

The General Electric Realty Plot is a planned residential neighborhood created in 1899 to house the top scientists and engineers working for the General Electric Company. Its inception and growth were a direct result of the rise of General Electric from a rather obscure beginning to a position in the forefront of science and Industry. Its residents were responsible for great advances in the fields of lighting, transportation and communication. The large, single-family homes are an exceptional collection of early twentieth-century domestic architecture. Planned as an ideal residential development, the neighborhood retains intact the elegance of its original design.

The General Electric Company was established in Schenectady in 1886 when Thomas Edison moved his Edison Machine Works from New York City. From two small buildings and one hundred employees in 1886, the company grew to more than 30,000 employees in 1910, and by 1923 employed over 74,000 people in forty cities. The name of General Electric became synonymous with the growth of the electrical industry because of the accomplishments of men such as Charles P. Steinmetz, Ernst F.W. Alexanderson, William Coolidge and Irving Langmuir. The achievements of these men and others like them ranged from improvement of the light bulb to development of the x-ray tube and the two-way radio. Electricity revolutionized American society and industry, and General Electric played a major role in the transformation.

In 1899, several of the principal directors, led by Edward W. Rice, Jr. and H.W. Darling, obtained approximately seventy-five acres east of Union College, and created a land-holding corporation under the title of the Schenectady Realty Company. Their intention was to create an ideal residential section to attract top-level employees to the Schenectady plant.

G.E. was well aware of the possibility that their brilliant scientists and engineers could be lured away by other firms or could leave to start their own firms. With its tree-lined streets and luxurious homes, the new neighborhood was an additional enticement to employment at G.E.

By 1910, the majority of the lots were sold to the scientists previously mentioned and important employees, each building large and expensive structures. The lots were also available to people not affiliated with General Electric, but in order to maintain the exclusive character of the residential area, the Realty Company imposed harsh requirements on construction within the lots. It was required that only single family houses could be built, that they be completed within two years after the purchase of the lot, and that each house was to cost no less than four thousand dollars. Some of the prominent citizens who built homes here and were not associated with G.E. were F.F. Eisenmanger, Mayor of the City; George Lunn, Lieutenant-Governor under Alfred E. Smith; and Henry B. Boardman, financier and President of Schenectady Trust Co.

The G.E. Plot is also significant as a fine collection of architectural styles that were popular at the turn of the century. They include Queen Anne and Shingle Style designs as well as the Colonial, Tudor, and Spanish Revival Styles that were dominant in the early 1900s. The most recent addition to the neighborhood, the First Unitarian Church, maintains the high standards originally set in 1899. Designed by Edward Durell Stone in 1960, the church is integrated very well into the landscape and neighborhood.

The G.E. Realty Plot's existence can be credited to the development of science and industry as reflected in the General Electric Company. Its residents were major contributors to the development of electrical technology and between them were responsible for over four hundred patents. The neighborhood continues to be the fine planned community it was designed to be.