Photo: Nathaniel Hill Brick House, ca. 1768, Route 17K, Montgomery, NY. The Brick House has throughout its history been a significant local landmark because of the building's architectural distinction, the integrity of the various farm buildings, and its association with the Hill family, early settlers of the Montgomery area. Listed on the National Register of Historic Places in 1978. Photographed by User:Daniel Case (own work), 2007, [cc-by-3.0 (creativecommons.org/licenses/by/3.0)], via Wikimedia Commons, accessed January, 2014. 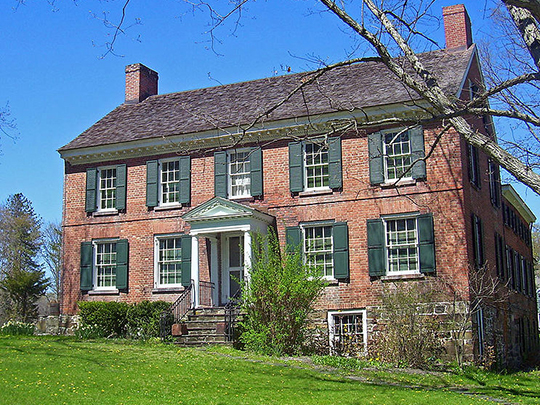 The Town was originally organized under the name of Hanover Precinct in 1772. The present territory of Crawford was then included, the whole having been taken from the old Wallkill Precinct. In 1782 the name was changed to Montgomery Precinct and 7 years later it was finally changed to the Town of Montgomery. This title was bestowed in honor of General Montgomery, who was killed in the assault on Quebec in 1775. Major Colden was the supervisor of the old Wallkill Precinct in 1768.

The record of the first town meeting is dated April 5, 1803. Reuben Neely was then chosen supervisor and Arthur Parks, town clerk. There were 55 overseers of highways in the town that year. But the laborers were few, the system of road-working was sadly defective, as in fact it remained for nearly 100 years afterwards, and the results were primitive and unsatisfactory. Although, of course, far less was required of a public road in those days than is now demanded, and the people accepted the situation without complaint, so far as the record shows.

The old Village of Montgomery is on the bank of the Wallkill in the southern part of the town. It was here that Henry Crist, Stephen Crist and Matthias Millspaugh settled at an early date, on the west bank of the river. Johannes Mingus built a grist mill there, which was afterward sold to James Ward with 200 acres of land, upon which the village was built.

James Clinton and William Crist, having obtained an interest in the Kennedy patent, upon which the village stands, laid out "a small town called Montgomery town," which gave the village that name. Among other early settlers were: John McFaugh, David Crist, John McKinstry, Matthew Hunter, Samuel Smith, Arthur Parks and Oolis Shulp. James Ward, the pioneer, lived in a log cabin.