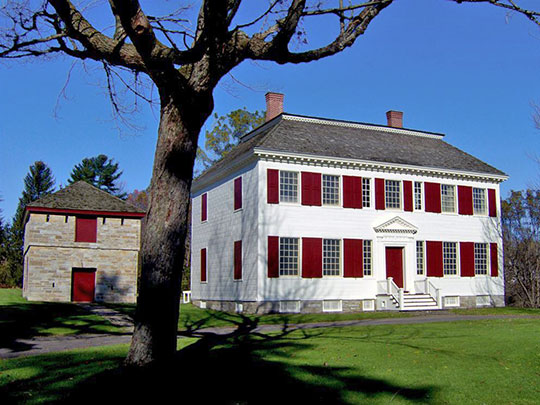 The settlement of Johnstown originated in 1762 as the seat of Sir William Johnson's baronial estate. Commissioned a major general and appointed "Sole Agent and Superintendent of the Six Nations of Indians and their Allies," Johnson secured the Iroquois as powerful military allies to the British Crown during the French and Indian War. Rewarded for his efforts with vast royal land grants, Johnson began to develop a manorial estate designed to increase the value of his Mohawk Valley holdings. Johnson established the seat of Tryon County at Johnstown in 1773. The community that grew up around the courthouse, jail, school and church provided by Sir William Johnson on the Cayadutta Creek became a center of commerce and civic activity. After the Revolutionary War, Tryon County was subdivided as new settlement occurred in the huge tract: Johnstown became the first seat of Montgomery County (created in 1784), later the seat of Fulton County (created in 1838). A state road to the west opened through Johnstown in 1806 stimulated early growth. In time, the opening of the Erie Canal (1825) and the Utica and Schenectady Railroad (1836) shifted the growth of commerce and transportation south to the central Mohawk Valley. Despite these changes, however, Johnstown remained the principal seat of legal affairs and commerce for Fulton County.