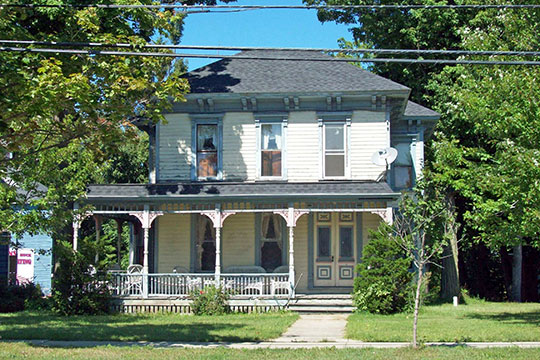 The Village of Lancaster is situated on lands formerly occupied by the Erie tribe and later the Seneca Nation of Native Americans. Significant non-indigenous settlement in western New York was delayed until the British surrender of western outposts, including the 1796 surrender of Fort Niagara. In 1792 and 1793, a group of Americans representing Dutch entrepreneurs acquired rights to approximately 3.3 million acres from the American Revolution financier Robert Morris (at that time, the Dutch could not hold title in their own names because they were not American citizens). Negotiations occurred with representatives of the Seneca Nation and resulted in the 1797 Treaty of Big Tree, under which the Senecas retained reservation land including the broad swath along what became the southern boundary of the Village of Lancaster.

The Dutch investors-known locally as "Hollanders" eventually acquired title from their American trustees and the Holland Land Company was born. The "Holland Purchase" was surveyed by Joseph Ellicott who undertook the project on behalf of the Hollanders in 1798 and 1799. No stranger to surveying, Ellicott had assisted his brother in laying out the new national capital city at the District of Columbia. Ellicott platted the Holland Purchase into ranges and townships, which were subdivided into sections and farm lots. Lancaster became a portion of Range 6, Township 11. After the survey, the managers of the Holland Land Company named Ellicott to be resident manager for their investment, a post which he held for more than twenty years.

Initial settlement was slow in the area of the Village due to the densely-forested terrain and difficulty which the settlers faced in even reaching their destination. The first settlement on the site of the Village of Lancaster occurred in 1807 on St. Mary's Street when Edward Kearney erected a log house near Aurora Street. In 1808 the Holland Land Company opened a road little more than a primitive pathway from Alden to Buffalo, accessing another tier of townships. This artery was initially called Buffalo Road; it later became known as Cayuga Creek Plank Road, then West Main Street, then Broadway. In the first two decades of nineteenth century, settlers to western New York also traveled along the Iroquois Trail (now Route 5) from Batavia, then southward in the Town of Clarence to the area surrounding Cayuga Creek. Improved transportation routes allowed Lancaster to develop as a local trading center for the agricultural community and permitted access to the nearby regional market of Buffalo. Just prior to the War of 1812, a mill, store, and tavern formed the nucleus of the community which developed into the Village of Lancaster. The availability of water power, coupled with the location of the settlement along an important road and the abundance of natural resources, added to the attractiveness of the area for development.

Stagecoach service was initiated in Lancaster in 1827 and was known as the "Pioneer Line," which ran from Buffalo to Lancaster and then onward to the east. Edward Kearney built a tavern on the site of the present-day Municipal Building; eventually known as the American House, Kearney's tavern became a popular stop on the east-west stagecoach route. The hotel was expanded several times prior to its demolition in the 1930s.

The improvement of the new territory was halted temporarily by the War of 1812. Thirty-two of the pioneers were called into service to defend the Niagara Frontier and to cross into Canada to fight the British. In 1813, the British burned the village of Buffalo in retaliation for the Americans' destruction of the Canadian settlement at Newark, known today as Niagara-on-the-Lake. The local militia prepared for a defense at Cheektowaga, just west of the Town of Lancaster, but the British failed to pursue the citizen-soldiers farther inland, thus sparing the Town the ravages of the conflict.

With the peace of 1815, subsistence settlement primarily by farmers steadily increased. The Town's first church was organized by the Presbyterians in 1818 and the Post Office was established in 1823 at the settlement which by then was known as Cayuga Creek, taking its name from the stream that meanders through heart of the community at the western periphery of the downtown.

Milling was the first permanent industry within the area that became the Village of Lancaster. In 1811 Ahaz Allen built a grist mill on Cayuga Creek near the creek's present intersection with Lake Avenue. The topography of this site included both high creek banks and a small falls which facilitated the construction of a dam. Mook's Mill was later built at the intersection of present-day Broadway and Cayuga Creek and in 1821 Jonathan Ball established a plant to produce earthenware. None of these early buildings are extant.