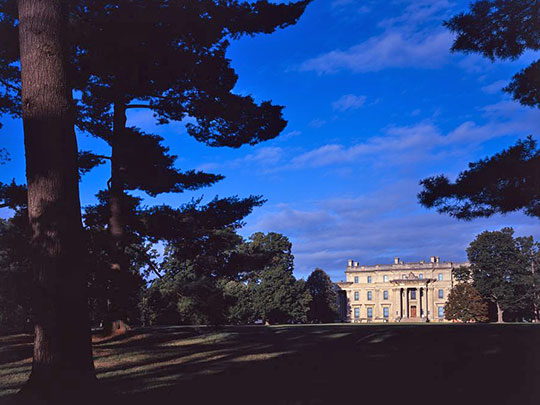 Vanderbilt Mansion National Historic Site is located in Hyde Park, Dutchess County, New York, approximately 80 miles north of New York City. The 212-acre estate is bounded on the east by the Albany Post Road (U.S. Route 9) and on the west by the Hudson River. The focus of the estate is the 1896-99 Mansion built by the prominent architectural firm of McKim, Mead and White. The original estate was purchased by Frederick W. Vanderbilt in 1895 from Walter Langdon, Jr., who had acquired the property through his grandfather, John Jacob Astor.

The eastern part of the estate was made into a carriage drive through the forest, and a pond was enlarged to form a miniature lake. A large standpipe, 10,000 feet of water pipe, and a large dam and reservoir were installed to form a water system. A powerhouse was built that generated the electricity and pumped the water needed by the estate buildings. Vanderbilt organized extensive forestry operations and had two palm houses built. An old frame bridge spanning Crum Elbow Creek was replaced by the White Bridge, a modern concrete and steel structure, noteworthy in its time for its engineering.

The grounds were extensively landscaped with formal Italian gardens, five greenhouses, hundreds of specimen shrubs and trees, a pool garden and a rose garden which were graced by pergolas, loggias, arbors, garden houses, walls and hedges. A creek was transformed with dams, sculptured pools and handsome bridges.

The Sexton estate was acquired in 1906 and all buildings except for a boathouse were demolished and the land adapted to the Vanderbilt "park plan."

Of the presently existing buildings, the Mansion is most nearly the same as when the Vanderbilts lived there. The exterior of the other buildings with the exception of the Pavilion and gatehouses have not been altered. All roads and trails are historic and retain their original alignments and, generally, their original width. The estate was enclosed by stone walls and fences which, for the most part, retain their original appearance.

The Hyde Park country estate of Frederick W. Vanderbilt is significant because it is a splendid artifact of the period between the Civil War and World War I when financiers and industrialists lived in a style which consciously emulated European pomp. The fifty room Beaux Arts Mansion designed by McKim, Mead and White, the most prestigious architectural firm of the era, is a significant and well-proportioned example of palatial architectural style. The opulent interiors of the mansion were designed and furnished by leading interior decorators. These interiors represent a variety of styles.

During the late nineteenth century about one-tenth of the population controlled ninety percent of the nation's wealth. Frederick W. Vanderbilt, the grandson of "Commodore" Cornelius Vanderbilt, who amassed a fortune in shipping and railroads, was a product of this era and one of the upper ten percent.

In 1885, Frederick inherited $10,000,000 from his father, William Henry Vanderbilt. At the time of his father's death, Frederick was the director of several railroads and subsequently used a financial base of $12,000,000 to increase his own fortune. He eventually became the director of 43 railroads including the New York Central. His estate at his death in 1938 was valued at $77,000,000. It was with such access to wealth that he could afford to spend two and a quarter million dollars on the Hyde Park Mansion in the Hudson River Valley where he lived with his wife, Louise.

Frederick and Louise Vanderbilt used the Mansion periodically during the spring and fall of the year. During November and December they resided at their New York City townhouse in order to participate in the social season; during March and April they would enjoy yachting off the coast of Florida.

Between 1900 and World War One the Vanderbilts also built but did not concurrently own summer residences in Newport, Rhode Island; the Adirondacks; and Bar Harbor, Maine. After Mrs. Vanderbilt's death in 1926, Mr. Vanderbilt took up permanent residence at the Hyde Park Mansion.

The setting of the estate is as much an important resource as the buildings or persons who lived there. The gardens and grounds represent important trends in the history of landscape architecture. The estate is the site of one of the earliest horticultural endeavors in the United States, begun in the late eighteenth century by Samuel Bard. The Italian Gardens existed in 1830 as part of Dr. David Hosack's estate, were continued by Walter Langdon, and were revised and enlarged in 1902-3 by James L. Greenleaf for Frederick W. Vanderbilt. A number of specimen trees, many from Europe and Asia, some in place for almost two hundred years, are planted throughout the grounds.

The White Bridge built in 1897 was one of the first steel and concrete bridges in the United States.

The furnishings of the Vanderbilt Mansion reflect turn-of-the-century interior decorator's room designs in which furnishings were generally treated as an integral part of the interior architecture. The furniture consists largely of a mix of pre-nineteenth century antique and high quality reproductions of earlier period pieces. Most of the paintings are of the salon type, popular with most wealthy Americans of that era. The Vanderbilt Mansion houses a particularly fine collection of Flemish and French tapestries as well as French and oriental rugs.

Interpretively, the site is not restricted to the Frederick W. Vanderbilts. It is expressive of the lifestyle of Americans of their class during the first two decades of the Twentieth Century. A large collection of fine quality, late nineteenth-century horse-drawn carriages and coaches and three F.W. Vanderbilt automobiles are exhibited in the north wing of the Vanderbilt Coachhouse.

Weatherwax, Mary B. "Documentary Report on the Vanderbilt Pavilion" (NPS, 1958)