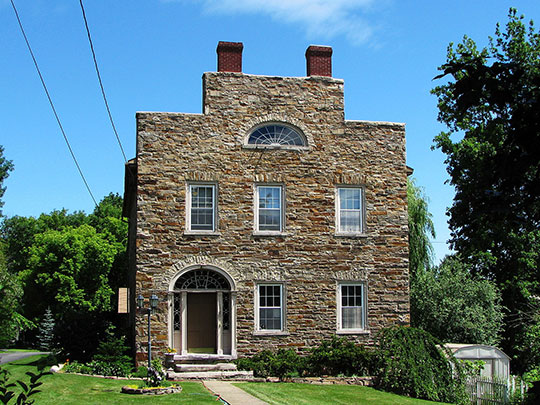 Former incorporated village approved for dissolution scheduled to be effective December, 2014. Portions of the village will revert to the Town of Ausable in Clinton County and the Town of Chesterfield in Essex County. Keeseville Village Hall was located at 58 Liberty Street, Keeseville, NY 12944.

The great potential water power of the Ausable River and its proximity to rich iron ore deposits and timber resources attracted the first permanent white settlers to "Anderson Falls" by 1808. A sawmill, grist mill and dam existed by 1812, and the settlement became Keeseville in 1815. Entrepreneurs John Keese and his son Richard established the Keeseville Rolling and Slitting Mill Company in 1816, the first such enterprise in New York State. Oliver Keese established a large woolen factory in 1819, and extensive industrial development soon followed along both sides of the Ausable. On the eve of the Civil War, Keeseville was a bustling Adirondack mill town, containing "... 7 churches, the Keeseville Academy, 2 extensive rolling mills, 3 nail factories, a machine shop, an ax and edge tool factory, a cupola furnace, an axletree factory, a horseshoe factory, a planing mill, 2 gristmills, and a nail keg factory," with a population of 2,569. The village prospered through the Civil War years by capitalizing upon the vast wartime demand for manufactured horseshoe nails. Using the patented nail making machines of local blacksmith Daniel Dodge, the Ausable Horse-Nail Company established by the Kingsland family in 1862 dominated the local iron industry, generating the wealth and investment capital reflected in many of Keeseville's finest residences and commercial structures. The stone company office and nail factory buildings, the ornate homes of Edmund and Nelson Kingsland on Main Street, and the Kingsland Block of Italianate style commercial buildings on Front Street attest to the importance of the Ausable Horse-Nail Company in the development of the community.

Keeseville possesses singular architectural significance and integrity among the communities of the Adirondack-Champlain region. The majority of structures built during Keeseville's boom period (1825-1880) have survived without substantial alteration: The modern village remains as it existed throughout much of the nineteenth century. The significant examples of Ausable River sandstone construction and the large number of both modest and stylish frame structures spared by the fires that devastated parts of the village contribute to Keeseville's remarkable historic setting. Among the most unusual of Keeseville's residences is the Tomlinson House, a late Federal style house built in 1846 which incorporates a formal Classical portico in its principal facade design.

The stylistic treatment and high level of craftsmanship exhibited in many village residences built between 1830 and 1855 can be attributed to Seneca and Isaac Perry, an exceptional father and son team of local carpenters/joiners most noted for their ornate and delicate circular staircases. The Mills (1836), Arnold (1840), and Kingsland (ca. 1855) houses are notable Perry structures which are among the most significant examples of vernacular residential architecture in the village. Rembrandt Hall (1851), a Gothic Revival style cottage which retains its circular staircase, was designed by Isaac Perry shortly before he left Keeseville to pursue formal architectural training in New York City. Isaac Perry's subsequent career included designs for St. Lawrence State Hospital, numerous state armories and civic structures and completion of the New York State Capitol. Seneca Perry's own Italianate style residence on Vine Street lies within the historic district.