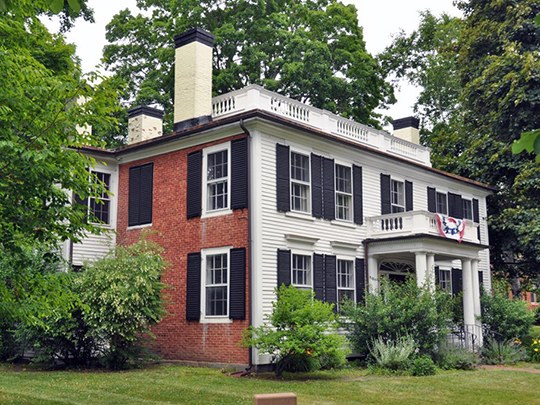 The Abbot-Spaulding House was listed on the National Register of Historic Places in 1980. Portions of the content on this web page were adapted from a copy of the original nomination document. [‡]

The Abbot-Spaulding House, located at 1 Nashville Street, Nashua, New Hampshire, is a two-story framed structure consisting of a hipped-roof Federal building with a Greek Revival addition attached to its rear, or north, elevation. The east and west elevations of the original house are of brick masonry construction while the remainder of the house is clapboarded. Chimneys for first- and second-story fireplaces are integrated within these brick ends. The facade of the Abbot-Spaulding House is five bays wide with the first-story central bay framed by an impressive portico supported by four fluted Roman Doric columns and surmounted by a balustrade. A similar balustrade is located on the roof. The front entrance consists of a six-paneled door with raised field paneling, sidelights with patterned tracery, fluted pilasters and a fanlight. Windows have six-over-six double-hung sash, interior sliding shutters and exterior blinds. Window crowns consist of unusually wide frieze boards and projecting caps that on second-story windows intersect the bed moulding of the cornice. Four windows are located on each of the east and west elevations.

Attached to the north elevation is a two-story, clapboarded, L-shaped addition with a low-pitched roof, that doubles the mass of the original house. Two chimneys rise from the ridge of the roof. A base cornice that forms a pediment and later casement windows are located on the west elevation. The east elevation of the ell is distinguished by a turned balustrade on the roof, and a two-story porch that projects approximately 10 feet beyond the wall. The porch is supported by four Roman Doric columns similar to those used on the portico.

Exterior changes introduced by William Spaulding, the 1905 owner of the Abbot House, exhibiting Colonial-Revival influences include the portico, the flattened semi-elliptical light and sidelights framing the front entrance, the roof balustrade, the two-story porch on the east elevation, the casement windows in the ell and the six-over-six double-hung sash windows throughout.

The floor plan of the original house consists of four principal rooms and a central hallway. The interior of the Abbot-Spaulding House retains most of its original Federal woodwork but was further embellished with Colonial Revival detailing. The central hallway exhibits the greatest changes. The original length of the hall was doubled by the removal of its north wall which was replaced by an arched opening. The flattened proportions of this archway repeat the dimensions of the fanlight over the front door. A quarter turn with landing staircase, originally located in the front portion of the hall, is now located on the northeast wall. The balustrade having three round dowel balusters per tread gracefully terminates in a spiral, a characteristically Federal style staircase. The angle-posts are of a heavier form though and probably represent the remodelling which was done in the early-twentieth century. A fireplace built according to the specifications of Count Rumford with a Federal mantelpiece is located on the north wall. The location of this fireplace approximates where a cooking fireplace would probably have been and is inconsistent with most Federal buildings. Thus, it is probably that Mr. Spaulding diminished the original hearth and installed a Federal style mantelpiece to create this smaller, more formal fireplace, which would have been more in keeping with the hallway he designed. Other details in the hall that represent Colonial Revival woodwork include the cornice with cymarecta, dentil, and rope moldings and the applied molding on the walls that forms an over-mantel panel with crosseted corners and rectangular panels throughout. The metope and triglyph motif in the chair rail is characteristic of the Federal style. Providing access from the hallway to the two front rooms are widened doorways containing later doors. The casings and foliated corner blocks suggest that these were probably remodelled in the mid-nineteenth century. The front parlor is located west of the hall and contains fine examples of Federal woodwork. The chimney-breast projects approximately one foot from the west wall. The mantelpiece consists of two reeded pilasters with full entablature supporting a delicate mantelshelf surmounted by another similar set of pilasters that extend to the room cornice. Horizontal sheathing forms the dado. The library is located east of the hallway. The library's east wall is distinguished by a projecting chimney-breast containing a mantelpiece consisting of two pilasters and full entablature. The frieze utilizes the metope and triglyph motif also found in the cornices, window surrounds and chair rails in the parlor and library. Later additions to the library's fireplace include blue and white tiles depicting Biblical scenes which face the jambs and the applied molding that forms an over-mantel panel.

Bedrooms are located above the parlor and library. A small sitting room was formed in what was formerly the south end of the upstairs hall. Glazed doors separate this room from the remainder of the hall. A cornice with cyma recta, dentil and rope moldings is seen in the sitting room and hall. Both bedrooms contain their original mantelpieces. The west bedroom mantelpiece consists of two flat pilasters with a simple mantelshelf. Horizontally sheathed dado, similar to that in the parlor, is also present in this bedroom. The east bedroom mantelpiece consists of a surround bordered by a simple moulding and a friezeboard with curved ends that sweep inward to support the mantelshelf. The bedroom closets contain the only remaining Federal doors in the house, distinguished by six panels with raised fields and casings with molded backboards. Other doors throughout the house consist of four flat panels with the top panels elongated and applied moldings framing the panels in a manner typical in the Greek Revival period. Door casings are incised planks with pateras or foliated corner blocks.

The ell of the Abbot-Spaulding House contains a modernized kitchen, dining rooms, bedrooms and storage rooms. Detailing is in a modest Greek Revival style, except in the dining room. This room was remodelled by William Spaulding in the early-twentieth century in the Colonial Revival style. Typical of this period are the casement windows with diamond-shaped lights that were installed in the north wall and the two display cupboards with elaborate classical detailing built into the east wall. A later chimney within the south wall services a small fireplace in the dining room and one in the sitting room to the south.

Architecture: The Abbot-Spaulding House survives as one of the most significant examples of the Federal and Colonial Revival periods of architecture in Nashua and the surrounding area. Built in 1804 as the prestigious home of Daniel Abbot, it was unusual in its clapboard and masonry construction. Federal influences throughout the interior are exemplified in the four mantelpieces and metope and triglyph motifs found in cornices, chair rails, and window casings. Prior to 1842, an ell was added to the north elevation. This addition retained the dignity of the original house but was favorably influenced by the Greek Revival style. Interior doors in the older section were changed to remain consistent with the doors in the addition. During the residence of George W. Perham (1854-1902) a Victorian tower was added to the central bay of the facade and the original windows were updated with two-over-one and two-over-two sash windows. In 1905, William Spaulding purchased the house and removed the tower. Spaulding and his son, Dexter Spaulding, a talented cabinet-maker, introduced a series of changes in the Colonial Revival style throughout the first half of the twentieth century which created an abundance of classical detailing. While the Abbot-Spaulding House exhibits equally fine examples of cabinetmaking from the Federal, Greek Revival and Colonial Revival periods of architecture, much of its original character and formality remains.