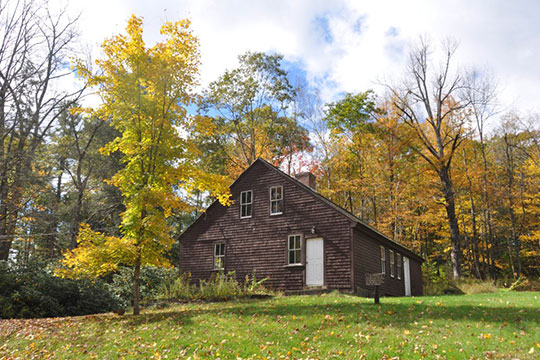 Incorporated in 1773, the town was named for Governor John Wentworth's cousin, William Fitzwilliam [1748-1833].

The Masonian Proprietors of New Hampshire ceded the area known as Monadnock Number 4 about 1765 to 21 proprietors of whom Colonel Sampson Stoddard was by far the largest shareholder.

So far as can be learned from early records, the movement of the incorporation of the territory known as Monadnock No. 4 took form at an annual meeting of the proprietors, March 31st, 1773. Doubtless the majority, if not all those present and voting, were settlers as well as proprietors. The meeting was held at the house of James Reed, inn-holder, with John Mellen serving as moderator. James Reed, Esq., John Mellen and Joseph Hemenway were appointed a committee to oversee the petition for incorporation.

The petition contained 3 main points as reasons for incorporation: 1) The matter of taxation, from which it is plain that in some way the officers of the adjoining incorporated towns had some oversight of the unincorporated towns as to their taxation, evidently a case of "taxation without representation;" 2) It was needful to quiet the minds of the people; and 3) To be able to warn off vagrants.

The charter for the town was granted in May, 1773, one of the last under the authority of King George prior to the American Revolution.

James Reed called the first meeting of the town under its charter, but no record appears. Early in the year 1785 the dwelling of Samuel Patrick, then town clerk, was burned and the town book of records, though rescued, was badly burned and other papers were entirely destroyed.