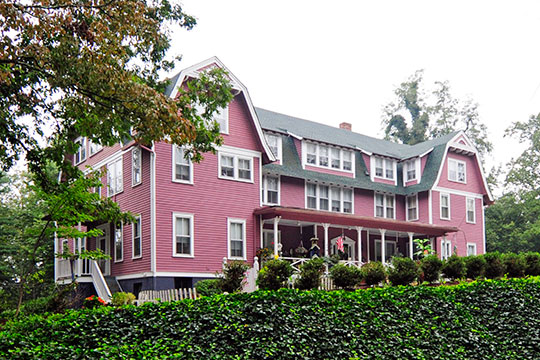 With the arrival of the Spartanburg and Asheville Railroad in 1878, Saluda began to develop as a mountain resort community known for its healthful and invigorating climate.

When the first train arrived at the mountaintop plateau community that was to become Saluda, it was met by a crowd of people who had gathered from miles around to celebrate the event. A celebration was in order, for an important chapter in railroad history had just been completed.

Prior to the coming of the railroad, Pace's Gap, as this area was known, was only a crossroads with a few scattered houses. A drover's inn run by the Pace family provided lodging for the traders who carried goods and drove herds of livestock through the gap from the western mountain settlements. This area of North Carolina had earlier in the nineteenth century been "discovered" by low country South Carolinians who sought to escape the extreme heat and accompanying illnesses associated with summertime. Summer colonies had developed nearby in the cool mountains of Henderson and Transylvania counties—the most prominent of which was Flat Rock—but the only way to reach these areas was by horse or stagecoach. Polk County, on the North Carolina-South Carolina border, provided the logical route between the lowlands and the mountains.

Originally known as the Spartanburg and Asheville Railroad, the line through Polk County was first proposed shortly after the Civil War. This first railroad to crest the Blue Ridge Mountains from the south was intended to connect in Asheville with a line to Tennessee, thus providing a long-envisioned link between eastern seaports and the midwest.

During construction of the railroad, many of the laborers lived in tents and shanties near the tracks along the route, but the foremen and engineers sought better accommodations at the top of the mountain. In 1877 Andrew Tanner, a contractor from Rutherford County who had been hired to help build the roadbed up the mountain, bought property along the proposed site at the top of the grade. Recognizing a market when he saw one, Tanner built a commissary for the railroad employees and a boarding house, called Mountain House, to provide lodging.