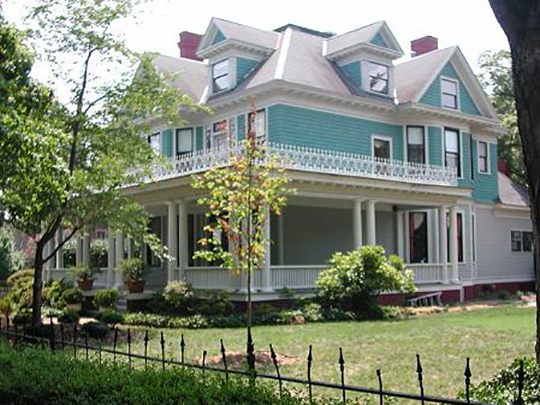 The Johnson Street Historic District represents the best-preserved section of Johnson Place, High Point's first major "streetcar suburb," which was laid out by developer R. Homer Wheeler in 1907. During the 1910s and 1920s the four tree-lined blocks of Johnson Street were the premier location for the residences of the men who managed High Point's burgeoning furniture and hosiery industries. The handsome but unpretentious Bungalow, Four Square, Colonial, and Victorian style houses held not only mill owners, but also many civic leaders, including the publishers of the city's newspaper, the founders of the city's hospital, and many politicians. Children raised on Johnson Street often made their mark far from the city, including New York Times music critic and author, J. G. Briggs, Olympic medalist Harry Williamson and four-star Army general Maxwell Thurman.

The first-time visitor to Johnson Street first notices the trees, the yards, and the lines of porches. The 1900s, 1910s and early 1920s were the heyday of the porch in America. Every new residence, it seemed had a broad cool front veranda. In that era before air conditioning, the porch was a breezy outdoor living room, where the family sat and visited with neighbors on summer evenings. Children loved porches, too, for they were an outdoor playground even when it rained. Beginning in the 1920s tastes changed and porches got smaller and smaller until by the Ranch house era of the 1950s they disappeared.

Next, the Johnson Street visitor notices the houses attached to those porches. Most of the dwellings have two floors, with the upper one sometimes squeezed under the roof in what architectural historians call a "one-and-a-half-story" arrangement. Gable roofs and hip roofs predominate. Exterior walls are often simple overlapping weatherboard, also known as clapboard. Sometimes wood shingles or horizontally grooved "novelty" or "German" siding are used. About a quarter of the dwellings are covered in red brick.

Johnson Street residences reflect the major architectural trends of the era. High Point had no professional architects at this time, so most designs were likely created by local contractors, inspired by nationally published books and magazines, and refined in collaboration with homeowners. Johnson Street houses are a blend of architectural styles, but the predominant flavor is post-Victorian.