Photo: Home in the College Hill Historic District, Greensboro, NC. The Historic District was listed on the National Register of Historic Places in Photographed by BenExwhysee (own work), 2007, [cc0-by-1.0 (creativecommons.org/publicdomain/zero/1.0/deed.en], via Wikimedia Commons, accessed April, 2017. 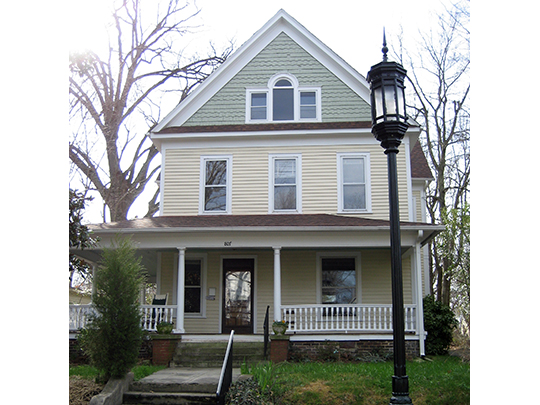 The College Hill Historic District [‡] was listed on the National Register of Historic Places in 1993. College Hill was designated a local historic district by Greensboro in 1980.

Dotting College Hill's irregular grid of streets, which continues downtown Greensboro's grid plan, is one of the largest collections of Queen Anne and transitional Queen Anne/Colonial Revival style residences in the city. Erected in the 1890s and the following decade, these generally substantial dwellings were joined in the following two decades by an impressive assortment of bungalows and Colonial Revival and Craftsman style foursquares. Modest Period and Colonial Revival style dwellings filled the district's few remaining open lots in the 1930s. Interspersed among the primarily frame single-family residences are a small number of apartment buildings and non-residential buildings—including three churches, two former firehouses, and two former groceries—erected to meet the needs of the busy, densely populated neighborhood. All of the district's buildings stand shoulder to shoulder on deep, narrow, urban lots, buffered from the street by shallow front lawns and mature shade trees.

Its lots almost all developed by World War II, the College Hill Historic District has experienced little rebuilding in the last fifty years. Most of the changes in the character of the district have occurred on Spring Garden and South Mendenhall streets, where some new apartment buildings have been constructed and some houses converted into stores, largely in response of to the demands of the student population. These incursions are limited, however, and College Hill remains a neighborhood of imposing late nineteenth- and early twentieth-century residences and quiet, tree-lined streets.

The College Hill Historic District is among Greensboro's most important and intact late nineteenth and early twentieth century neighborhoods. First established in the mid-nineteenth century around Greensboro Female College, it emerged as the city's major western neighborhood in the 1890s and 1900s. Its explosive growth during these two decades was prompted by its inclusion within city limits in 1891; the opening of the state Normal and Industrial School for White Girls (now the University of North Carolina at Greensboro) in 1892; the activities of corporate real estate interests; its proximity to the jobs of the colleges, downtown Greensboro, and the industries to its south along the tracks of the Southern Railway; and the 1902 arrival of the electric streetcar [See Streetcar Suburbs, 1888 to 1928.] With these pillars of development in place, College Hill grew steadily in the 1910s and 1920s and, to a lesser extent, in the 1930s as well. Its development is part of and reflecting the major trends which raised Greensboro from a town to a city in the late nineteenth and early twentieth centuries.

The District's few surviving antebellum dwellings are joined by a large group of Queen Anne and transitional Queen Anne/Colonial Revival style dwellings unmatched in the city. Its bungalows and Craftsman and Colonial Revival style Foursquares are also noteworthy components of the city's architectural history. These single-family dwellings, joined by apartment buildings, churches, and firehouses, comprise an intact late nineteenth- and early twentieth-century neighborhood.

Historic development of the College Hill Historic District began with the 1837 establishment of, and acquisition of property for, the Greensboro Female College and continued through the 1892 opening of the state women's college (the presence of two colleges in the neighborhood gave it its name) up to the onset of World War II.

Prior to the late nineteenth century, few residences were erected within the College Hill Historic District. An 1879 map, which includes that part of the district closest to downtown and the Greensboro Female College, the neighborhood's first hub, pictures only about ten houses. Three of these, all constructed prior to the civil War, still stand. The earliest, the Walker-Scarborough House at 911 McGee Street, is thought to have been built by Gov. John Motley Morehead for his daughter, Letitia, upon her marriage in 1845 to Stephen Walker. It was located at the western edge of Morehead's expansive Blandwood estate, part of which comprised the southeastern corner of the district until subdivided in 1891 (Guilford County Deed Book 53, Page 550). The dwelling's low hipped roof and eave brackets recall the much grander Italian villa style of the Blandwood mansion. Its two-story, one room deep, I-house form, however, is part of a vernacular tradition popular in the region throughout the century. Even at the century's close, a few of the district's dwellings continued to make use of the I-house form.

In the 1890s and 1900s College Hill blossomed, in large part because of annexation by the city, corporate real estate activity, the establishment of the state Normal and Industrial School for White Girls (now the University of North Carolina at Greensboro), and the running of a streetcar line down West Market, Tate, and Spring Garden streets. Numerous Queen Anne and, particularly, transitional Queen Anne/Colonial Revival style dwellings still stand in the neighborhood dating from these bustling two decades.

Perhaps the most important factor to promote continued development of College Hill in the early twentieth century was the coming of the electric streetcar around 1902. With the two colleges it became the third and final pillar of support for the neighborhood. The streetcar came west from downtown along Market Street past Greensboro Female College, turned south down Tate Street, and headed west again at Spring Garden Street, where it continued about two miles to its termination at Lindley Park. The streetcar increased access to jobs throughout the city, adding to the desirability of a neighborhood already close to the jobs of downtown, the colleges, and the industries located along the tracks of the Southern Railway just south of the district. The streetcars were replaced by electric trolley buses in 1934, which in turn were displaced by diesel-powered buses in 1956.

With the trolley, all College Hill's major development forces were in place. The next forty years, between 1902 and 1942, saw incremental development of the neighborhood, until virtually all of lots were filled with houses and apartments. In the 1910s and early 1920s the Queen Anne and transitional Queen Anne/Colonial Revival style houses so popular in the previous two decades were joined by foursquares and bungalows. In the late 1920s and 1930s these were joined by Colonial and Tudor Revival style cottages.