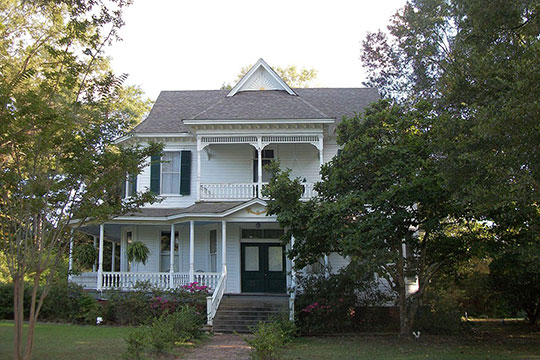 Canton, the seat of Madison County, was incorporated in 1836. Built on the low divide halfway between Big Black River and Pearl River, it achieved a character that was neither the Old South of the Big Black Valley nor the Piney Woods of the Pearl River Valley, and is dotted with homes distinguished by their variety of plan and appearance. The Courthouse, raised in 1852, and the Square come closest to fitting the groove of other Mississippi county seats. Its Georgian design is well suited to the ideals of those early settlers from Virginia, the Carolinas, and Georgia who obtained Canton's charter of incorporation. The old jail stands on a back alley off Center St. near the square.

Travel on the Natchez Trace and cotton culture gave Canton the wealth that was to express itself in the homes. The finest of those left standing is the W. J. Mosby Home (private), Center Street, two blocks east of the courthouse. Surrounded by formally landscaped grounds this imposing, square, red brick structure is designed with a massive two-story Corinthian portico and with two wings in the rear which enclose a courtyard. The roof is topped with a cubical observatory. In addition to the slave quarters in the basement, there are 15 large rooms, most of which have a natural grace that has not changed since the house was built in 1856 by Colonel William Lyons.

Colonel Lyons, a pleasant but imperious landholder, left the task of building with an architect who, prior to one of the colonel's European excursions, implored his attention about a certain matter but was frustrated by the colonel's pleasantries. When the colonel returned, the greater part of the house was finished, but as he climbed the curved staircase he was amazed to find he could go no farther than the second floor. The architect had tried to tell him there was no stairway to the observatory. Subsequently the shaft was raised directly in the upper hall and a lovely winding stair extended to the roof. The upper floor of the home was used by General Sherman, the lower by his mules, during a temporary Federal occupation of Canton. When Colonel Lyons fell on evil days after the war, he went to his good friend, Mosby, the father of the present owner, expressing the wish to sell to him rather than to a less appreciative owner.