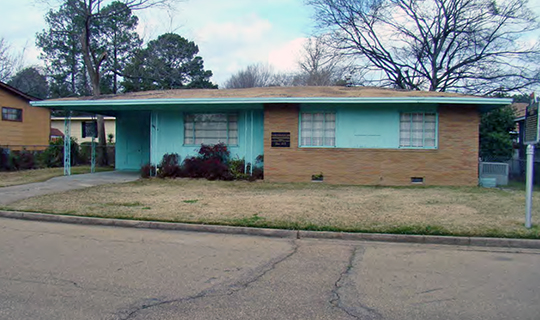 The Medgar Evers Historic District was listed on the National Register of Historic Places in 2013. Portions of the content on this web page were adapted from a copy of the original nomination document. [‡] .

The Medgar Evers Historic District contains 44 buildings and is located approximately 3 miles northwest of the downtown central business district of Jackson, Mississippi, which is the capital city of the state and one of the seats of Hinds County. This district is comprised primarily of residences in the Ranch Style typical of a 1950s suburban development, planned by African Americans for middle-class African American home buyers. The majority of houses in the district retain their architectural integrity, with modern windows and enclosed carports being the most common alterations over time. One building, the Medgar Evers House, is previously listed on the National Register.

The Medgar Evers Historic District encompasses the 36 original lots developed from 1955 to 1957 by Winston J. Thompson and Leroy Burnett, African American entrepreneurs. Known as the Elraine Subdivision, six additional lots were later developed by Burnett in early 1960s. The Greater Mt. Mariah Missionary Church (formerly the Elraine Baptist Church), was constructed ca. 1956. The district covers approximately twelve acres and is located about 3 miles northwest of downtown Jackson. Hawkins Field (Old Jackson Municipal Airport) is less than a mile to the southwest of the district. The district is roughly bounded by W. Ridgeway Street to the north, Medgar Evers Boulevard to the south/southwest, Munsey Street to the south, and Miami Street to the east. Medgar Evers Boulevard is a southeast extension of U.S. Highway 49 and is a major corridor running between 1-220 to the northwest and Woodrow Wilson Avenue, to the southeast.

Houses in this district are predominately in the Ranch style, generally set back from the street about 20-30 feet. Most residences in the district are one-story, with low-pitch roofs and horizontal lines that are typical of the style. The house designs also incorporate carports, acknowledging the importance of the automobile in American culture by the 1950s. Although there are no sidewalks in the district, the Ranch homes with landscaped lawns along moderately wide asphalt streets retain the suburban character of the original development.

The Medgar Evers Historic District is historically significant statewide as the first modern subdivision designed for middle-class blacks after World War II in Mississippi. The subdivision was developed by Winston J. Thompson, a black entrepreneur, and a majority of the houses were built by Leroy Burnett, a black builder. Many of the early residents were teachers or others engaged in professional and clerical employment that placed them in the middle class. Noted residents of the neighborhood include Medgar Evers, the Mississippi Field Secretary of the National Association of Colored People, who was assassinated in the driveway of his home, one of the signal events of the Civil Rights Movement. Author and educator Margaret Walker Alexander purchased the first home in the subdivision in 1955.

The Medgar Evers Historic District was developed as the Elraine Subdivision. The Capital Land and Investment Company owned the land and filed a plat with the Hinds County Chancery Clerk for "Elraine Resurvey, Part Four, a resurvey of Lot 43 Elraine & Part of Lot 7, Block 45, Elraine Resurvey Part One" in 1941. The plat included 80 parcels located along the south side of County Road (now Ridgeway Street) and on the north and south sides of Guynes Street, between Missouri Street on the west and Miami Street on the east. Land west of Missouri Street had been subdivided and developed in the late 1920s.

The Capital Land Company failed to build or clear the land, and in 1951 conveyed the property to W. B. McCarty, a white businessman who in turn sold the property to African American developer Winston J. Thompson in 1955. Thompson and Leroy Burnett became partners in the development and construction of the Elraine subdivision. Both men were veterans and secured financing from the Veteran's Administration.

The lots on the 1941 plat were 50 feet wide. Thompson and Burnett widened the lots to 75 feet by dividing every third lot. It is not known whether the developers obtained the services of a local architect or used stock plans to build the 850 to 950 square foot houses along Guynes Street. They completed thirty-six similarly scaled homes with similar floorplans between 1955 and 1957. The Ranch style was the predominate design. Mrs. Grace B. Sweet, an original resident, recalled that Thompson graduated from Lanier High School in 1948. After returning from the military he opened a real estate business. Leroy Burnett, also a veteran, was a native of Terry, Mississippi.

Thompson and Burnett advertised their businesses in the Jackson Advocate, the African-American newspaper in Jackson. Burnett, operating as Burnett-Gaston & Associates, ran a small box advertisement as "Builders of New Homes" over several months in 1956. A larger advertisement filed by W. J. Thompson & Company in the March 10, 1956 issue, announced several properties for sale, notably this one which was almost certainly an advertisement for the homes in the Elraine subdivision: Also 13 New 3 Bedroom Homes in Very Nice Location only $200.00 Down to Veterans Plus Closing Costs.

Thompson's firm was recognized as the largest African-American real estate business in the state. Between 1952 and 1956, Thompson was credited with building over 250 homes for African-Americans in Jackson, Meridian, Greenwood and Forest. The firm was the first black-owned business authorized to originate and service FHA and GI loans.

The Elraine subdivision was directly adjacent to white neighborhoods, in particular to Missouri Street to the south and the large Green Fields subdivision to the north and west. Although Mrs. Grace Sweet recalled that "the idea of a predominantly black neighborhood was not welcomed," there are no contemporary reports of violence or legal efforts to prevent the construction of the subdivision. Mrs. Sweet stated further: These homes were welcomed by the Afro-American community because this was the first complete street of homes of this caliber built in Jackson for Afro-Americans. Three bedrooms, nice large bath, central heat, attached storage room and beautiful landscaped lawn were the features advertised, and the homes sold like hotcakes.

Margaret Walker Alexander and her husband, Firnist, bought the first house on Guynes Street in 1955. Alexander, an author and educator, recalled purchasing the home for $9,500 and "we sort of consider ourselves pioneers of better housing for black people." Her neighbor and colleague, Bernice Lloyd Bell, remembered the subdivision as "the first neighborhood that was somewhere really decent for blacks to live." Both women remembered a tight-knit community with a garden club and a Christmas pageant, a recollection shared by Mrs. Grace B. Sweet.

Many of the families that purchased houses in the Elraine subdivision were teachers and other white-collar workers. Alexander remembered that buyers had to have an income of $5000 to qualify. The Jackson City Directory first has entries for Guynes Street in the 1957 edition. For ten of the twenty-two families on the street, the husband, the wife, or both, were educators. Two were nurses and two were insurance agents. One resident owned and operated a drug store on Farish Street. Medgar Evers occupation was listed as "field secretary, NAACP." The 1958 edition included seven additional families, with three employed in education.

Most of the recollections of life in the Elraine subdivision recall a close-knit community with neighborhood and family celebrations. However, the peaceful nature was interrupted on the night of June 12, 1963. Medgar Evers, who moved onto the street with his wife and children in 1956, was shot and killed in his driveway by a sniper. The effect on the neighborhood was profound. Margaret Walker Alexander recalled the yearly Christmas celebration with lights and a pageant. That changed after the Evers assassination. Alexander explained that "after he was killed, the street was dark at Christmas."

As a black neighborhood adjacent to white residences, the Elraine subdivision was on the front line of the Jackson strictly segregated society. Myrlie Evers-Williams, in her autobiography, described how that affected the daily life of the community: A block away from our house was a section of white homes. The unwritten law of the neighborhood was that our children never played with theirs. It was not that we didn't want them to know white children, we did. It was just that in Jackson, Mississippi, it was too dangerous. An altercation, a childish fight could be magnified into race war. We all knew who would win such a contest.

On the tax map for this part of the city, Guynes Street lots stand out as substantially larger, with wider street fronts, than lots on nearby streets, including those of the white subdivisions. A drive down the surrounding streets bolsters the impression that Guynes Street residents not only occupied a higher economic class than nearby African American neighbors but also had more substantial houses than nearby white neighborhoods, where smaller tract houses predominate. The fact that Guynes Street lay adjacent to predominately working-class white neighborhoods is significant and probably explains how this middle-class black neighborhood was able to gain a foothold in northwest Jackson. Meanwhile, middle- and upper-class white neighborhoods were coalescing in northeast and south Jackson, leaving the northwest section of the city open for African Americans and working-class whites.