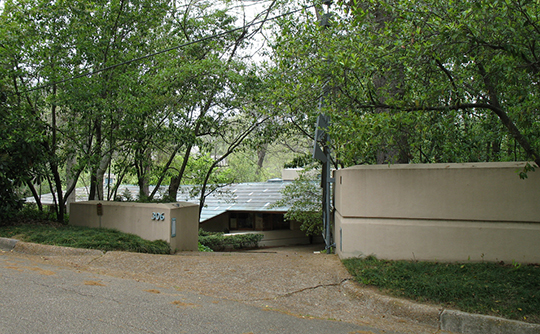 Fountainhead [‡] was listed on the National Register of Historic Places in 1980.

Fountainhead (J. Willis Hughes House) located at 306 Glenway Drive, Jackson, Mississippi, is a single-family residence designed by Frank Lloyd Wright in 1948. The house was faithfully constructed to the original plans between the years 1950 and 1954. It presently exists in an unaltered but deteriorated state and is in the process [1980] of being restored to its original condition.

The site consists of a heavily wooded and landscaped area of approximately one acre, situated on the corner of Glenway and Woodland Drives and was selected according to criteria provided by Wright and received his approval prior to design. The terrain slopes radically from both streets forming a wooded draw into which the house was wrapped. A fountain emerges from a triangular mass at the west terminus of the structure, fills a high bowl, spills over into a wading pool and cascades down a series of steps into the swimming pool. The swimming pool was designed in Wright's words to appear as "a pond in a woodland glade." The structure was designed according to Wright's Usonian concept and is of a "T" or "Y" configuration. The basic module for development of the plan is a parallelogram of four-foot sides. This module and the slope of the natural terrain provided the framework upon which the form of the house was molded.

The major materials used in the construction of the building are restricted to four concrete, copper, glass, and heart tidewater red cypress. All floors throughout Fountainhead are of concrete construction with an integral terra-cotta color finish. These floors are scored in the parallelogram module. All exterior walls in the structure are of concrete with a sand finish, the thickness varying from twelve- to twenty-four inches. Interior walls are of Wright's "sandwich wall" which consists of a plywood core with horizontal cypress boards and specially designed triangular battens on each face. All ceilings are of cypress board-and-batten construction of similar appearance. Roof construction is of fir joists with marine plywood decking and copper roof covering according to a special batten design by Wright. The copper was aged to give a green patina. All rooms are open to the underside of the sloping roof and the under surface is finished with the cypress board-and-battens. Architectural development outside the walls of the house such as terraces, walls, driveways, etc., continue the parallelogram module and all are built of concrete.

The functional layout of Fountainhead cannot be adequately described in number of rooms since Wright's spaces tend to flow together freely and often have no defining walls as limits. In one wing are the living room, an associated dining alcove, a kitchen or "work space," and a guest powder room. The west wing contains a master bedroom and bath suite, a dormitory or boys' bedroom, a guest bedroom, a girl's bedroom, a second full bath and additional half bath. The third wing consists of the carport and shop. There is a basement area which consists of boiler room, utility room, and a party room with a full bath. In addition to the interior spaces outlined above, there is a living room terrace, a dining room terrace, and an extensive swimming pool development. Three fireplaces are built into the structure, being an extension of the concrete walls. One occurs in the living room and one each in the master bedroom and girl's bedroom. The living space is a large room anchored on one end by the fireplace mass and flowing through a glass wall with thirteen-foot ceiling which cantilevers sixteen-feet out over an elevated terrace. The kitchen is of a European design as conceived by Wright and is of a parallel but angular "pullman design." Storage is generally open cypress shelving for easy access to goods and utensils, and all counter tops are covered with copper. The original kitchen equipment specified by Wright has been restored or replaced with the original manufacturer's contemporary equivalent. Bedrooms consist of highly functional, usually small spaces with high ceilings and open ventilation. Closets, dressers and vanities are Wright designed and job built. The heating system for the house consists of hot water radiant heating in the floor. The house was not originally air conditioned.

In true Wrightian fashion, most of the furnishings in Fountainhead were designed either on the drawings or in supplemental drawings supplied by Wright. This includes all of the bedroom furniture, the dining room tables and chairs, living room couches and lounge chairs, and some twenty ottomans or stools which were utilized at various places throughout the house. All of these pieces are still in existence in the structure.

Fountainhead was designed by Frank Lloyd Wright in 1948 and constructed during the years 1950-1954. The house has been described as one of the most complete residences embodying Wright's concepts of the "Usonian House," especially the relationship of the house to the street, entrance positioning, preservation of privacy, integration of interior with exterior, and use of indigenous materials. The name Fountainhead is a reference to the novel by Ayn Rand and is derived from a fountain Wright incorporated into the structure of the house. A significant degree of integrity exists due to the house's original owner, J. Willis Hughes, who occupied the house from its construction until January, 1980. At that time it was sold to Jackson architect Robert Parker Adams who is presently undertaking a detailed restoration. Fountainhead is the only Frank Lloyd Wright design in Mississippi and the state's most valuable structure from the Modern movement.

1. Numerous books by and about Wright which are readily available and not included herein.

2. Hitchcock, Henry-Russell, In the Nature of Materials. Duell, Sloan and Pearce, 1942. Inscribed "To the Hughes in Mississippi — Frank Lloyd Wright, January 29, '50."

7. Misc. books, clippings and letters in possession of Fountainhead Foundation.

1. Photographs and slides from original construction to present, from collection of Fountainhead Foundation.

3. Miscellaneous telegrams and correspondence with Wright and Wright's office from period of construction, in collection of Fountainhead Foundation.