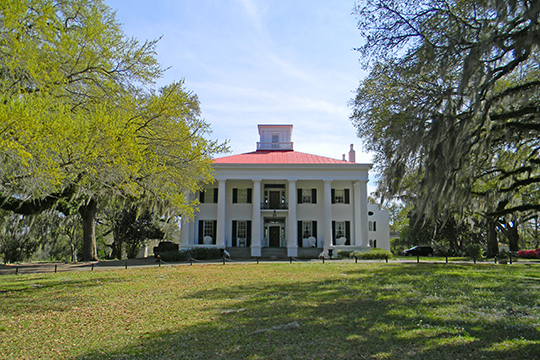 D'Evereux was listed on the National Register of Historic Places in 1972. Portions of the content on this web page were adapted from a copy of the original nomination document.

D'Evereux (also known as D'Evereux Hall) is located at 170 D'Evereaux Drive, Natchez, Mississippi. Perfection of proportion and academic rendering of its structural and decorative detail make D'Evereux one of the outstanding American examples of the Greek Revival style. The north (front) portico features six Doric columns of fluted stucco over brick which support a full entablature: architrave with paneled soffit, plain frieze, and cornice with cymatium and fascia. The ceiling of the portico is adorned with plaster medallions and borderwork in the egg and dart, bead and reel, and acanthus leaf motifs. Rectangular engaged columns with Doric capitals define the corners of the facade. The entrance, recessed approximately two and one-half feet within a shouldered architrave, has an eight-pane transom and pairs of Doric pilasters flanking the side lights. An identical doorway on the second floor opens onto a small balcony enclosed by a wrought-iron railing in a palmette and floral volute design. Windows on the facade are six-over-six, with green shutters which are thought to be original. The wooden panels beneath the lower sashes of the first-floor windows open from the interior to give access to the portico. The shafts of the six columns on the south portico are smooth rather than fluted and instead of a balcony there is a second-story gallery with railing of vase-shaped balusters which extends the width of the house. Doorways of the two porticoes also differ, with these on the north reinforcing with their straight lines the rather monumental academicism of the facade. The rear entrances, perhaps reflecting the less formal use of the south portico, are more lightly — almost Federally — treated, with muntins applied to fanlights and side lights in a gossamer pattern of ovals, circles, and swags. The original simulated oak graining of front and rear doors has been meticulously restored, and other exterior woodwork is of cypress. Walls are stucco scored to resemble stone.

D'Evereux has a fully finished basement, two residential floors, and an attic floor beneath a hipped roof. Centered on the latter is a square cupola which repeats in miniature a number of elements already noted: Doric pilasters at the corners, shuttered apertures, broad frieze, and molded cornice, the whole being encompassed by a widow's walk with railing of vase-shaped balusters and square corner posts. The first-floor layout includes a central hallway with double parlors on the west; on the east are the dining room and the former butler's pantry, now converted to a kitchen. The stairway is offset next to the kitchen, leaving unobstructed the broad expanse of hallway. The second floor consists of hallway with two bedrooms on each side, separated by baths and closets. Changes made during the 1930s in the original floor plan, including enclosure of the south portico and partitioning of the present kitchen into pantry, breakfast room, and bath, have been removed; with the exception of closets and baths, the house is as it was built.

Interior architectural detail includes three mantelpieces and four of marble, with one of black marble in the dining room. Baseboards in the double parlors are painted to simulate white marble, while those in the dining room and hallway are marbleized in black. Door casings are fluted moldings with circularly carved endboxes, and the front and rear entrances also have between casing and transom a cornice-like projection known locally as a "candle-shelf." Decorative ceiling plaster work on the first floor is especially fine, featuring leaf and dart and bead and reel moldings, anthemia, acanthuses, arabesques, paterae, and frets. Rugs and draperies woven for the first floor carry out a color scheme of green, blue, gold, and ivory. Furnishings original to the house include a Recamier sofa, six side chairs, a game table, a mid-Victorian carved mahogany sofa and eight drawing-room chairs, and several Empire pieces: a square marble-top parlor table, a bookcase with "petticoat mirror," and a mahogany dining table and sideboard. In the dining room is the original set of porcelain china manufactured by Edward Honore, Paris, in 1820, and on the north wall of the room hangs a portrait of General John D'Evereux, for whom the house was named.

Overlooking the rear garden, facing east, is the garconniere (now a garage and apartment), a two-story stucco-over-brick structure with galleries, stepped gables, and oval and round-arch windows. Fire destroyed a similar building, the original kitchen, which was located at the southeast corner of the house. The D'Evereux property once consisted of eighty acres, twelve of which were elaborately landscaped in gardens, a series of terraces, and a lake. The present estate contains seven acres and is extensively planted in lawn, shrubs, and flowers.

The builder of D'Evereux was William St. John a planter born in Maryland in 1800. Elliot was president of the Natchez Protection Insurance Company, chartered in 1829 to insure Mississippi cotton crops from the time of ginning to sale at New Orleans or elsewhere. Mrs. Elliot was Anna Frances Conner, daughter of William Conner of Berkley Plantation, in the Second Creek settlement near Natchez. Twice widowed by the time she was twenty-three, Mrs. Elliot brought to her third marriage substantial estates inherited from her previous husbands, a Mr. Bell and Dr. William H. Ruffin. In 1836 Elliot purchased eighty acres on the outskirts of Natchez from Henry Chotard and the heirs of James Moore and completed his home on the site by 1840. He named it D'Evereux in honor of his mother's brother, General John D'Evereux, who served with Simon Bolivar. Although the architect of the house is unknown, the names of two men presumably associated with its construction have been preserved, inscribed in chalk on two attic beams: "P.H. Hardy, Ohio," and "William Ledbetter, Virginia."

In December, 1842, Henry Clay, a friend of the Elliots, was entertained at D'Evereux, and it was during one such visit that his portrait was painted by the French artist Bahin. Elliot died childless in 1855, having stipulated in his will that unless his nephew and intended heir, William St. John Elliot Parker, took the Elliot surname, D'Evereux was to be incorporated by the state legislature as a Catholic male orphanage under the supervision of the Bishop of Natchez. Although the nephew failed to comply with the terms, Mrs. Elliot retained the property by endowing $27,500 for the D'Evereux Hall Orphan Asylum built at Aldrich and Pine Streets, Natchez. (When the building was demolished in 1969, the orphanage bell and a plaque commemorating the patronage of the Elliots were remounted in the rear garden of D'Evereux.) Upon Mrs. Elliot's death in 1876, the estate passed to her grandniece, Mrs. Bayard Shields (Margaret Spencer Martin) of Natchez, and Mrs. Shields' daughter, Mrs. Ernest Bennett, subsequently inherited the original furnishings of the house.

The decline of D'Evereux began in the aftermath of the Civil War with the billeting of Union troops on the grounds and continued through the early decades of the twentieth century, when tenant farmers stored harvested crops inside the house and cooked in the parlor fireplaces. In 1925 it was purchased by Miss Myra Virginia Smith, a Chicago schoolteacher who left an account of her first impression of the house: "The galleries were sagging, plaster was coming down, rats had eaten through the baseboards, silverfish had devoured the wall paper, and 200 panes of glass were needed. But I was entranced. The house was dilapidated, but it had a grandeur...that fascinated me....I felt I had to own it."

Miss Smith initiated the restoration of D'Evereux and made it her permanent home after her retirement in 1941 until her death in 1961. By the terms of her will, the estate was sold to finance scholarships to the University of Chicago, from which she had been graduated in 1902. In 1962 the First Baptist Church of Natchez acquired 48.6 acres of the D'Evereux tract for the purpose of expanding its facilities, and Mr. and Mrs. T.B. Buckles of Natchez purchased seven acres and the house, in which they now [1971] reside. Mr. and Mrs. T.B. Buckles, Jr., occupy the apartment on the second floor of the former garconniere. The Buckles family has made a thoroughgoing study of the history of D'Evereux, and the superb restoration which has resulted is a major attraction of the pilgrimage sponsored each spring by the garden clubs of Natchez.