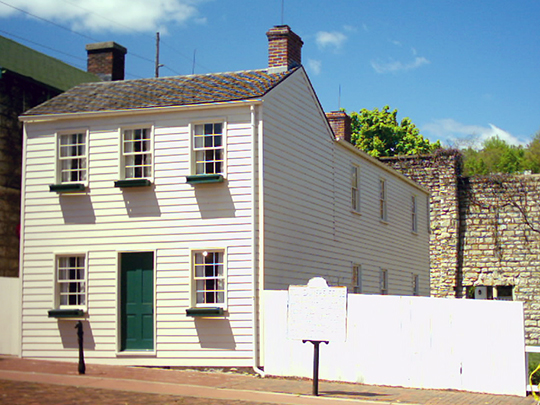 The Mark Twain Boyhood Home was designated a National Historic Landmark in 1966 and was listed on the National Register of Historic Places in 1976. Portions of the content on this web page were adapted from a copy of the original 1976 document. [‡]

Samuel Clemens lived in his boyhood home (known as Mark Twain Boyhood Home) located at 206-208 Hill Street, Hannibal, Missouri, from the time of its construction in 1844 when he was nine years old until 1853 when he left Hannibal, except for a brief period in 1846-1847 when the family temporarily lost the house due to financial difficulties. During the hiatus, the Clemens resided in a building across the street.

The simple, unpretentious appearance of the frame Mark Twain Boyhood Home was typical of middle class Missouri homes of the period. Architecturally, it seems to derive from early Pennsylvania folk styles. The front portion resembles most closely a Pennsylvania "one over one."

The structure has remained unchanged since construction except for the added story. The six rooms have been furnished in a manner appropriate to Tom Sawyer and his family and Tom's whitewashed fence at the side of the house facing the street has been restored.

There are no distracting modern intrusions in the vicinity. The city has endeavored to maintain the general historic atmosphere of the neighborhood.

On one side of the Mark Twain Boyhood Home is a stone museum containing items relating to the Mark Twain theme and on the other side is a garden. Other nearby structures associated with the author are, "Huck Finn's Home," "Becky Thatcher's House" and the building where young Sam learned the printer's trade.

The Mark Twain Boyhood Home has appropriately been described as perhaps the Midwest's outstanding literary shrine. It owes its significance to the fact that it was the boyhood home of Samuel Langhorne Clemens, known better under the pseudonym of "Mark Twain," who was America's foremost humorist and was also widely known as a novelist. He became one of the best known literary figures of the nineteenth century. William Dean Howells, leader in American letters, has called Twain, "the sole, the incomparable, the Lincoln of our literature...the very marrow of Americanism."

Born in Florida, Missouri, on November 30, 1835, young Clemens and his family moved to Hannibal in 1839. He lived in that Mississippi River town until 1853.

Clemens' life in Hannibal had a great effect on his later literary career. Among his best known books are, The Adventures of Tom Sawyer and The Adventures of Huckleberry Finn, published in 1876 and 1884 respectively, which are well known to most school children in the United States. Many of the episodes related in these two volumes were based on his boyhood experiences in Hannibal. A number of the characters in these books were drawn from Clemens' associates in his youth. "Becky Thatcher," Tom's sweetheart in Tom Sawyer resembled Laura Hawkins, the "Judge" was his father; "Aunt Polly," his mother; "Sid Sawyer," his brother; "Negro Jim" resembled a slave known as Uncle Dan'1; "Huckleberry Finn" bears a similarity to Tom Blankenship; and Tom Sawyer, according to Clemens, was "a combination of three boys whom I knew," one of whom was the author himself. In his Life on the Mississippi, Clemens tells of his return to Hannibal after thirty years' absence. He climbed Holliday's Hill and reflected over what he saw. He pointed out the various parts of the town with which he was once familiar and reminisced on individuals whom he once knew and what had happened to them.

Following his father's death in 1847, young Clemens, only twelve years old, was forced to leave school. Apprenticed to a printer, he mastered that trade and learned something of composition. He became a newspaper writer. He eventually went to New Orleans where he apprenticed himself as a river pilot which he called his university. After serving as apprentice for a year and a half, he became a full pilot, Clemens served as a licensed river pilot for two and a half years. His Life on the Mississippi is based in a large part on these experiences.

The Civil War stopped much of the traffic on the river, so Clemens was forced to turn to another occupation. After spending a short time in the army, he, in 1861, became secretary to his brother who, in turn, was secretary to the territorial governor of Nevada. Finding neither duties nor the salary attached to the position adequate, he, after becoming a prospector for a short time, became a reporter in Virginia City. His western experiences are incorporated in the book, Roughing It.

Within a few years after the Nevada experience, he became a recognized author. With the publication of The Innocents Abroad, he achieved national recognition. Until the time of his death on April 21, 1910, Clemens wrote many books and stories, some of which were published posthumously. He had a wide range of interests and wrote on a broad variety of subjects and so avoided the trap of working too long in a single vein. He traveled extensively in the United States and in Europe.

"In time, the works of Mark Twain will be further winnowed, but there can be no question as to the cordiality with which Americans pride themselves on his accomplishment. To find fault with him at the present times seems almost as ungrateful business as was pointing out the shortcomings of Longfellow in 1860. And the rest of the world has long since also learned to love his mirth and to admire his representative qualities. In England he has been almost as widely read as at home, in Germany his books have multiplied in reprints, and today in Russia he enjoys a favor astounding in scope and in heartiness. Like Emerson and Whitman, he seems to reflect the qualities of his country with unusual fullness, and he transcends all other American writers in exhibiting the cheerful irreverence which may be characteristic of us as a people." (NSHSB)

In his later years, Twain's philosophy and writings grew increasingly pessimistic. In The Prince and the Pauper, and even more in A Connecticut Yankee in King Arthur's Court and Personal Recollections of Joan of Arc, Twain's despair with the seeming hopeless condition of the human spirit manifested itself. In The Mysterious Stranger and What Is Man? it was so evident as to lead critics to call Twain the forerunner of the austere, almost bleak literary style typical of Hemingway and Faulkner.

Although he first won literary success as a humorist, Mark Twain will probably be longest remembered as the author of works as Life on the Mississippi and Huckleberry Finn. The latter especially has grown tremendously in literary esteem over the decades; what was once accepted as an adventure story is now recognized as one of the great odysseys in literature, a sweeping metaphor of human growth and aspiration. One of the first Americans writing outside the European literary tradition, he generated in his best work enormous depth and perception from a purely American viewpoint. His writing is thus a critical milestone in the development of world and American literature.

Work Projects Administration, Missouri: A Guide to the "Show Me" State, 1941.

Gohdes, Clarence, "Mirth for the Millions," The Literature of the American People, ed. Arthur Hobson Quinn, 1951.