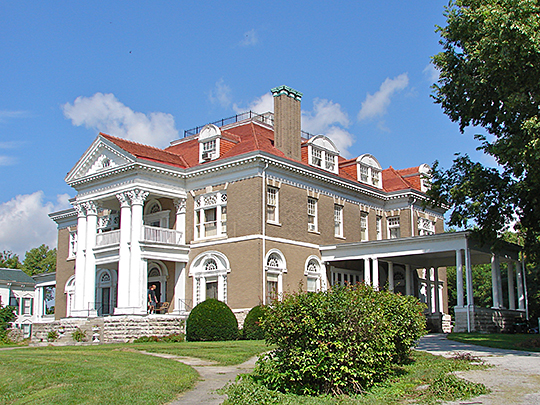 Hannibal is best known as the home town of Mark Twain (Samuel Langhorne Clemens). Hemmed between the twin bluffs of Twain's "Cardiff Hill" and Lovers' Leap, the city extends from the original townsite, narrow flood plain near the water's edge, westward along three valleys.

Like other towns on the Mississippi River, Hannibal owes its early growth to river trade. In 1818, the site of Hannibal was granted to Abraham Bird of New Madrid, in exchange for property destroyed by the New Madrid earthquake of 1811. The following year, a group of land speculators platted a town at the mouth of Bear Creek which they named Hannibal, in the classic fashion of the period. They then held a sale of lots in St. Louis. The establishment of a post road and mail service from Louisiana to Palmyra brought a gradual increase of cabins in the settlement. By 1827 Hannibal had 5 families; in 1830 it consisted of "thirty souls." For a time the overwhelming magnificence (on paper) of Marion City threatened to snuff out the flickering light of the village; but Marion City did not materialize, and the growth of Hannibal was put on a sound basis by the formation of the Hannibal Company, and the incorporation of the town in 1838 under trustees who sold property "at low prices, chiefly to actual settlers."

Before long, flatboats laden with Iowa grain and hemp tied up at the waterfront; hogs fattened in the back country were driven in for market; logs were floated down from Wisconsin and Minnesota and converted into boards. A pork-packing plant was established; tobacco factories, flour mills, and saw mills flourished. A schoolhouse was erected in 1830; Samuel Stone started a ferry in 1832; a library was organized; and the Commercial Advertiser was established in 1837. The town's growth was marked by such milestones. In 1847 the local newspaper boasted that during the past season steamboats had carried downstream from Hannibal's port, freight valued at more than $1,200,000.

Fully established as a place of importance, Hannibal eased into the complacent life of a river town. Once a day, a packet arrived upstream, from St. Louis and another downstream from Keokuk. Years later, Mark Twain would picture the town . "... the streets empty, or pretty nearly so; one or two clerks sitting in front of the Water Street stores, with their splint-bottomed chairs tilted back against the wall, chins on breasts, hats slouched over their faces, asleep...; a sow and a litter of pigs loafing along the sidewalk, doing a good business in watermelon rinds and seeds; two or three lonely little freight piles scattered about the 'levee'; a pile of 'skids' on the slope of the stone-paved wharf, and the fragrant town drunkard asleep in the shadow of them..."

The town began to assume its contemporary character shortly before the Civil War, when railroads from the East stopped short at the Mississippi River. Hannibal's position on the western shore suggested it as a logical terminus for a railroad to the West. In 1856, the first train of the Hannibal and St. Joseph Railroad was run westward as far as Palmyra, the county seat. Three years later, the road was completed across the State to St. Joseph. Shops for the road were established in Hannibal, and in then, in 1862, was built the world's first railroad mail car. Here, too, was constructed the General Grant, the first locomotive built west of the Mississippi, which made its initial run in March 1865.