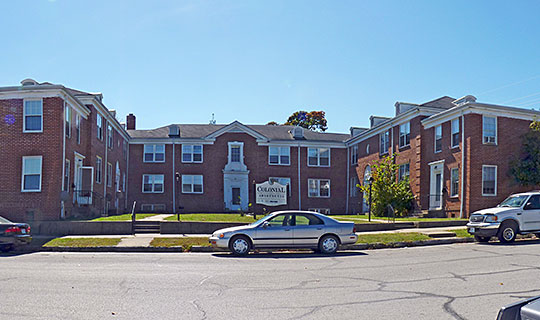 The Colonial Apartments were listed on the National Register of Historic Places in 2001. Portions of the content on this web page were adapted from a copy of the original nomination document. [‡] Adaptation copyright © 2013, The Gombach Group.

The Colonial Apartments (406 Walnut Street), built 1947-1948, constitute the only true apartment block complex in the small county seat town of Carthage, Missouri. They were constructed at a time when returning service men and their families, together with other newcomers to a thriving post-World War Two economy, created a housing shortage. B&G Construction Company of Carthage, owner-builder, engaged the Kansas City, Missouri architectural firm of Neville, Sharp, and Simon to create a design in the Colonial Revival Style. The apartment complex utilizes the two city lots on which it is sited to provide an urban-like ambience for sixteen apartments and four town houses.

The multi-story apartment block as a building type, consisting usually of three or more stories, is an almost exclusively urban phenomenon. In Carthage, neither urban nor densely populated, the architects of the Colonial Apartments managed to design a two-story configuration that was distinctive for the town, but not incongruous, either in style or scale. In keeping with their domestic purpose the Colonial Apartments utilize decorative elements and design principles more typical of dwellings than of large buildings of the style. Though clearly in the stream of the Georgian Colonial Revival, a style well elaborated by 1947, they have characteristics that seem to draw directly from Colonial prototypes. The result was a unique addition to an already rich aggregation of good architecture in Carthage.

Despite having been used as rental housing for more than half a century, the Colonial Apartments are little altered, and retain integrity of location, design, setting, materials, feeling, and association. Even original interior partition walls are intact, as are most of the windows. Comparing the present structures with the original plans, the only apparent changes to have occurred are as follows: Concrete globes intended to surmount the gateway piers to the service court between the building appear never to have been put in place; and white-painted decorative railings around the flat roofs of the subsidiary "wings" at the ends of the main blocks, if ever built, are not extant.