Photo: North Side of Courthouse Square, March, 2014. Courtesy of photographer, Daniel Comer, Carthage, MO. The Historic District was listed on the National Register of Historic Places in 1980. 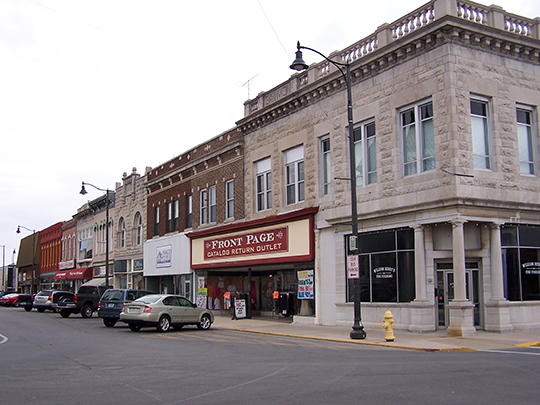 The Carthage Courthouse Square Historic District was listed on the National Register of Historic Places in 1980. Portions of the content on this web page were adapted from a copy of the original nomination document. [

Carthage Courthouse Square Historic District is, as the name implies, a grouping of shops and stores, most of them with relatively unspoiled nineteenth-century facades, set in traditional Southern fashion around a courthouse. The Jasper County Courthouse today is surrounded by well-manicured lawns, shaded by oak and maple trees, and is complemented and reflected by more than two dozen buildings constructed of the same gray stone; most of them were built around the turn of the century. This material, a light, almost white, stone with stylolitic veining, is popularly known as Carthage marble, and its extensive use on the square makes the city's commercial district exceptionally attractive. Despite a few intrusive modern banks and stores, and three or four instances where an old facade has been hidden by a modern false front, the Carthage Courthouse Square Historic District has a distinctly nineteenth century flavor. Such other modifications as have been made generally have not touched the second story (most of the buildings contain only two stories) of the older buildings.

Carthage Courthouse Square Historic District is significant in American architecture for several reasons. First, it superlatively illustrates the two major phases of post-Civil War commercial architecture — brick Italianate and Romanesque Revival. In addition, the Carthage Courthouse Square Historic District and its side streets contain unusual and beautiful examples of cast-iron ornamentation. Moreover, extensive use of Carthage marble provides continuity and an elegance that few cities of this size can rival, and gives this collection of buildings a cohesiveness based upon style as well as contiguity.

Carthage was a late nineteenth-century boom town. Left devastated, its shops and dwellings burned to the ground in the Civil War's guerrilla warfare, the town contained only around a dozen families in 1866. By the end of 1869 there were about 1,800 inhabitants; the number grew to 5,315 in 1880 and 9,323 in 1890[1] Few American cities grew at this pace. Carthage owed its unusual growth to mining — lead at first, then zinc.[2] Railroads arrived on the heels of zinc mining, and the boom began for Carthage.[3] After a workman discovered that the light-colored limestone so abundant in the area could take a high polish, quarries of Carthage marble, as the stone became known, added to local prosperity and provided an unusual architectural component for the entire city.[4] Adjacent farm land, conducive to raising a type of wheat for the fine flour needed in cakes and pastries, brought five flour mills to the town and added to the general prosperity.[5]

Evidence of this affluence is nowhere better illustrated than in the numbers of doctors and lawyers who located in Carthage during these years. These particular professional men were always drawn to growing communities whose citizens not only needed but could afford to pay for legal and medical services.

In October, 1872, nine doctors and sixteen attorneys had offices in Carthage. By 1880 the number had increased to nineteen doctors and twenty-three attorneys.[6]

The important lead and zinc mines developed in Joplin, Webb City and other nearby towns, rather than in Carthage, allowing the latter to benefit from the mines while avoiding their undesirable accompaniments. Mine owners and operators tended to live in Carthage, where their families would not be exposed to the ugly sight of saloons and bawdy houses. Around the turn of the century Carthage could boast a larger number of millionaires per capita than any other city in the United States. These men not only built impressive mansions for themselves, they invested in business buildings.

The lead and zinc mines slowly became depleted and by the 1920's the great days of mining were over. New chemical processes reduced dependency upon Jasper County wheat. However, the quarries continued, and several small but stable industries developed, so that Carthage never suffered any real blight or decay. However, its population in the 1960's — roughly 10,000 — was little changed from that of 1900. Architecturally, the slow growth was a blessing, for it permitted most of the commercial structures built during the heyday of mining to remain essentially unaltered. Since Carthage had never been the garden variety of boom town with tacky, jerry-built structures, today the solid commercial buildings in Carthage Courthouse Square Historic District retain much of their nineteenth-century elegance and integrity.

The golden days of mining and the development of the local quarries coincided with the trend toward Romanesque Revival architecture in the United States. Businessmen hastened to replace brick Italianate commercial fronts with facades of Carthage marble in the new vogue. In spite of the heavier Romanesque design of most of these buildings, the light-gray, almost white, color of this particular stone offset the ponderous effects of the Romanesque style.[7]

Carthage Courthouse Square Historic District is also significant to historians and students of architecture in that the arrangement of the structures here provides a glimpse of a small-town business area when people walked or used a horse and buggy to do their shopping. Drug stores, as befitted their importance in those days, occupied structures second only to banks and were often to be found in the newer buildings. A bank stood at each corner of the Square.[8] Adjacent streets were filled with grocery stores, meat markets and small service shops, which remained housed in the old brick, Italianate buildings. With only a limited amount of frontage on the Square, merchants had to build long, narrow buildings, often with a wall in common with a next-door neighbor, as in the case of the Myers-Garland buildings.[9]

The center of the Carthage Courthouse Square Historic District, both geographically and architecturally, is the magnificent Jasper County Courthouse, designed by R.A. Orlopp, Jr. and completed in 1895. Constructed, naturally, of Carthage marble and enhanced by colonnaded turrets, four corner towers, and a domed central clock-tower topped with a cupola, the Jasper County Courthouse combines the monumental dignity of Romanesque Revival design with some of the romantic elegance of Chateauesque. Both grand and picturesque, this building well symbolizes the spirit of the confident and aspiring city of Carthage at the end of the nineteenth century.[10]

Carthage and Jasper County: What and Where They Are (Carthage, 1887).