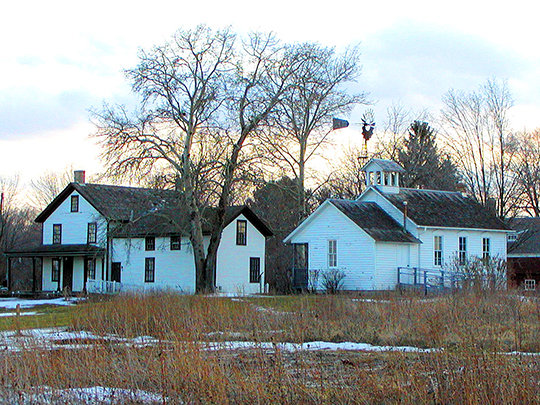 The City of Falcon Heights was originally part of Rose Township, established in 1850 in Ramsey County and named after early settler Isaac Rose. Rose Township also included the Cities of Lauderdale, Roseville and parts of Minneapolis, St. Paul and St. Anthony. Heman Gibbs settled just west of Cleveland Avenue in 1849 on lands situated north and south of Larpenteur Avenue. There he built a sod house that was replaced in 1854 by the present Gibbs Farm. It is listed on the National Register of Historic Places and is currently owned by the Ramsey County Historical Society.

Heman Gibbs also built the first schoolhouse in Rose Township, which continued to operate until 1959 at the southwest corner of Larpenteur and Cleveland Avenues. The school was extensively remodeled in 1930 by the WPA and finally demolished in 2008 when the University of Minnesota, owner of the property, found it too deteriorated to be moved or preserved. The schoolhouse site is expected to become the home of the Bell Museum of Natural History in the next ten years.

The Minnesota State Fair has occupied the land west of Snelling and north of Como Avenue since 1885 and draws over two million people to Falcon Heights each year. The University of Minnesota School of Agriculture, established in 1888 southwest of Cleveland and Larpenteur, has conducted continuous agricultural experimentation and research for more than 100 years at this location.

Once dominated by farms and nurseries, Falcon Heights got its name in the 1930s from a subdivision that was platted by John Cable and named by and for his real estate agent, a man named Faulkner. Falcon Heights was incorporated as a village in 1949 and as a city in 1973 by mandate of the State Legislature. The community grew rapidly after 1940, reaching a population of nearly 6,000 in 1960. In the 1920s the Snelling and Larpenteur intersection was the site of Curtiss Field, one of the Twin Cities' earliest air fields. The only remaining trace of Curtiss Field, where Northwest Airlines is said to have "gotten off the ground," is in the name of the nearby neighborhood park. Commercial development began at Snelling and Larpenteur and on Hamline between Hoyt and Iowa Avenues in the 1940s. The distinctive Harvest States Co-op building at the southwest corner of Snelling and Larpenteur, now occupied by TIES, was built in 1949.

In 2003 the aging shopping center at the southeast corner of Snelling and Larpenteur was razed to make way for the City's largest development project in many years. The new complex, Falcon Heights Town Square, provides a mix of commercial and residential space, including owner-occupied townhomes, senior apartments and affordable apartments for families.

The 45th parallel runs just north of Falcon Heights in Roseville. A marker at the northeast corner of Cleveland and Roselawn Avenues denotes its location.