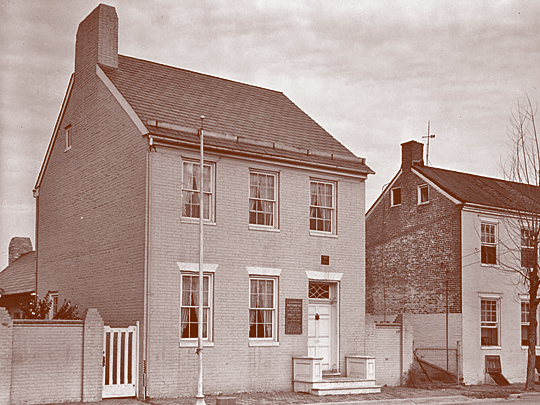 Fredericktown, as it was initially called, began as a speculative venture bankrolled by Daniel Dulany in 1745. Dulany, a shrewd lawyer and entrepreneur from Prince George's County, bought 1,000 acres and then proceeded to sell lots platted along a grid plan. He laid out 340 lots along the grid pattern that is virtually unchanged. The sale of the town lots began slowly and was aimed at Palatine Germans. The deeds carried the stipulation that buyers must erect a structure of a predetermined size within a specified time span of usually two years. Just three years after Dulany initiated his speculative venture, Frederick was designated as the county seat for the newly erected Frederick County, which included what is now Carroll, Montgomery, Frederick, Washington, Allegany and Garrett counties.

By the close of the 18th century, Frederick had grown into a small but prosperous community consisting of 449 residences, 7 churches, a courthouse, 2 market houses, schools and a population of 2606. The community attracted ambitious men who were seeking opportunities to advance themselves in the burgeoning frontier city. John Hanson provides the example. A native of Charles County and delegate to the Maryland General Assembly, he moved to Frederick in the 1760s to become Deputy Surveyor for Frederick County. Hanson settled in Frederick buying a lot on West Patrick Street in 1773. He represented Maryland at the Second Continental Congress and was elected as its first presiding officer, President of the United States in Congress Assembled.

The first quarter of the 19th century also attracted several other people who rose to prominence. Roger Brooke Taney, a Calvert County native, moved to Frederick in 1801 to advance his law practice in the town's fledgling bar association. For 22 years Taney's legal and political career flourished in Frederick before the lawyer achieved positions of statewide and national prominence as the Maryland Attorney General and the U.S. Chief Justice, respectively.

Transportation routes played an early role in Frederick's development. The centrally located town became an early crossroads on major transportation routes. The Baltimore Road ran through Frederick on Patrick Street and connected to the National Road in Cumberland. A milestone from the Baltimore Turnpike still exists today on East Patrick Street. Frederick was also a major stopping point on the road from Gettysburg, Pennsylvania to Washington, D.C. Rail transportation came very early to Frederick. As one of its first depots, the Baltimore & Ohio Railroad built a freight station in 1832 on the southeast side of town. A second, more elaborate station for passengers was built in 1854 to handle the increasing volume on the rail line. A central location and accessible transportation helped to spur Frederick's growth as a regional market center.

Industrial development in Frederick began with the establishment of a canning factory by Louis McMurray in 1869. The Baltimore native realized that with all of Frederick's agricultural connections, a canning factory could be very profitable. However, the local farmers were very skeptical of McMurray's plan and refused to sell him their crops. Undaunted, McMurray purchased 3,000 acres of farm land and grew his own vegetables. Success came quickly to McMurray and in 1886, the canning factory was packing 3 million cans of corn a year. Because Frederick was primarily a center of commerce in an agricultural county, initial industry capitalized on this available agricultural resource. Similar ventures like the Frederick City Packing Company and the White Cross milk plant followed McMurray's lead, took advantage of the existing commodities and operated successful businesses.