Photo: Home in the Garrett Park Historic District, Garrett Park, MD. The Historic District was listed on the National Register of Historic Places in 1975. Photographed by User:ZeWrestler (own work), 2012, [cc-by-3.0 (creativecommons.org/licenses/by/3.0)], via Wikimedia Commons, accessed June, 2014. 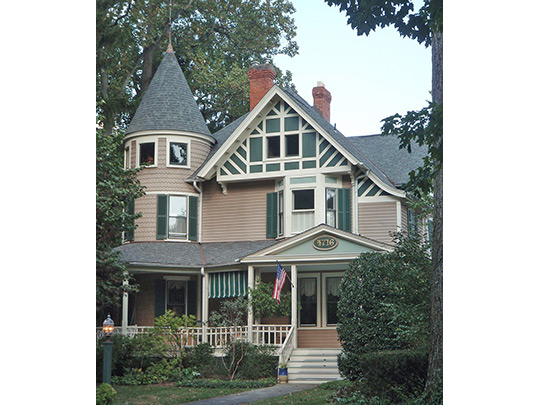 Garrett Park is one of the County's earliest and most significant railroad communities. Named after Robert Garrett, founder of the B&O Railroad and built on 154 acres of the original 500 purchased by Henry Copp in 1886, the community reflects nearly a century of diverse architectural styles. These include a good number of Victorian (primarily Queen Anne style) structures, "Chevy" houses from the 1920s (so named because of the optional garage and Chevrolet), Sears "mail order" houses from the 1930s, post-World War II Techbilt structures, and contemporary homes with Frank Lloyd Wright influences that were designed by Howard University professor Alexander Richter. The varied styles and building setbacks are unified by an original landscape plan that was directly influenced by horticulturist William Saunders. On both the meandering streets following the topography north of Strathmore and on the grid streets to the south there are dense shade trees and flowering trees and shrubs. These mature plantings and the varied species which typify Saunders' arboretum concept distinguish Garrett Park from the more homogeneous subdivisions nearby. The incorporated town has its own mayor and council, who meet in the town hall (an adapted 1897 church); residents nurture a strong sense of community through encounters at the post office in the single commercial building next to the railroad tracks and through participation in many community activities.