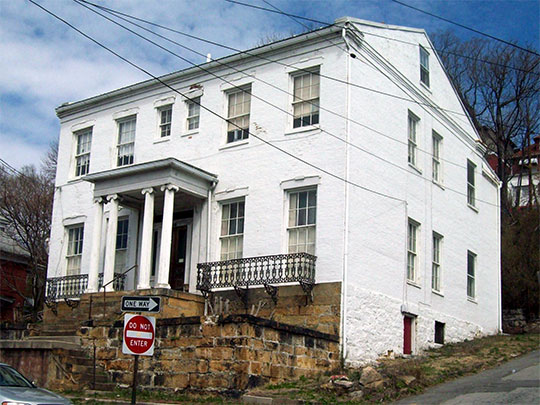 Native Americans resided in the area and sustained their population utilizing the area's natural resources through hunting, fishing and certain types of agriculture. Large villages were located along the North Branch of the Potomac River at Oldtown and Cresaptown. A system of ridge top trails throughout the Appalachian Region linked other areas both north and south with what is now Allegany County.

European settlement of the area began in the mid-eighteenth century. Early settlers were attracted to the area considering the ease of communication and travel afforded by the Potomac River Valley. Early routes westward towards the Ohio River Valley and through the Appalachian Mountains left the Potomac River near Cumberland. Early settlers were engaged in hunting, trapping, and agriculture, with some specializing in exploration and surveying of lands.

Concurrent with early settlement of Allegany County was the development of a transportation network through Allegany County connecting the Eastern Seaboard and the Ohio Valley. The location of the route westward was established before the French and Indian War. Trails were replaced with roads. The Cumberland or National Road was built along this same route in the early 19th century making it one of the major routes for the movement of settlers and their supplies across the Appalachians to the Midwest, and in turn, provided for the movement of agricultural goods and natural resource products to the Eastern Seaboard from the Appalachians and the Midwest.

Coal was known to be present in Western Maryland as early as 1755 when a Jefferson and Frye map of Maryland and Virginia showed a Mine de Charbon in the Georges Creek Valley. In the late 18th century mining of that coal had begun in earnest, but larger scaled and more intensive resource exploitation commenced in the mid-19th century with the arrival of railroads and the C&O Canal. Mining of the Georges Creek Coal Basin peaked in the early 1900's with employment in the mining industry totaling over 5,000 miners. To accommodate this extractive industry, the rail network was expanded. The County population doubled between 1880 and 1930, from approximately 40,000 to 80,000 people as the demand for labor in both the mining and transportation industry increased.