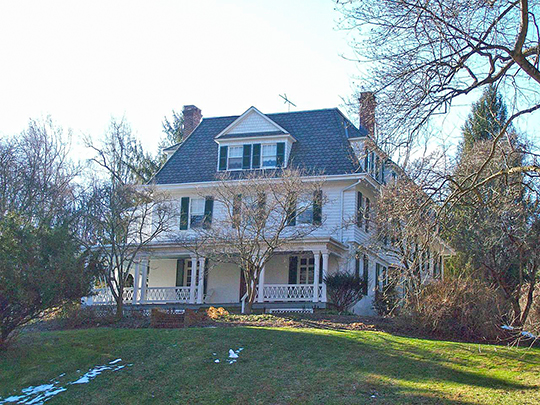 The village of Catonsville [1] was reportedly founded in the early nineteenth century along the Frederick Turnpike in the midst of farms to the west of the city of Baltimore. The Ellicott brothers had created the turnpike just after the Revolutionary War because they needed a better route to transport flour from their mills at present-day Ellicott City to Baltimore. The Baltimore Iron Works Company had owned much of the land east of the Ellicotts' mills, where Catonsville stands, in the eighteenth century. The company leased land to farmers, tavern keepers, storeowners and artisans. The original partners in the company, Dr. Charles Carroll, Barrister, Charles Carroll of Annapolis, Daniel Carroll of Duddington, Daniel Dulaney, and Benjamin Tasker, were dead by 1807, and the land was now in the hands of over 30 of their heirs. A partition of lands was sought, and surveyor Samuel Green divided the 12,000 acres into 153 lots. This sub-division was approved in April 1810, thus opening up land for sale and for more intensive development. Along the south side of Frederick Road lots 60, 61, and 153 comprise much of the area that would become Central Catonsville and Summit Park, with east and west boundaries perpendicular to Frederick Road. However, the focus of settlement shifted eastward, where Joseph P. Fusting laid out lots in 1829 around the intersection of Ingleside Avenue and Frederick Road. This would remain the center of Catonsville. As George C. Keidel, PhD., recalled of Catonsville in his youth in the 1870s, "The Catonsville of my earliest recollections consisted merely of a small nucleus of stores and homes clustered about the intersection of the Frederick turnpike and Ingleside avenue, and of a widely flung series of country places interspersed here and there with groups of smaller houses."