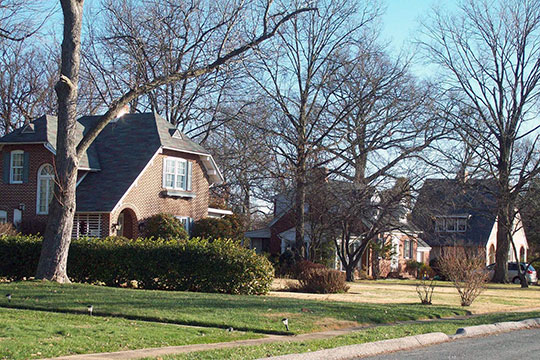 The Linthicum Heights Historic District was listed on the National Register of Historic Places in 2006. Portions of the content on this page were adapted from a copy of the original nomination document. [‡]

Linthicum Heights is a suburban community radiating from the intersection of Maryland Route 170 (Camp Meade Road) and County Route 169 (Maple Road) and situated on a series of low hills about three miles south of the Patapsco River. The land on which it is located was originally part of a 1674 land grant from Lord Baltimore to Nickolas Painter, of St. Mary's County. Known as "Andover," the land extended southward from the banks of the Patapsco River and comprised some 1,640 acres. By 1878, the "Andover" tract, which would later become Linthicum Heights, consisted of 445 acres. Platted beginning in 1908, the subdivision includes 17 tree-shaded streets created as a planned suburb located on the rail lines connecting Baltimore, Annapolis and Washington.

The district is almost entirely residential, consisting of 254 contributing resources, although two churches, a cemetery and a former commercial/residential building are within the district boundaries. The dwellings range in date from the late nineteenth century through the present, with the majority dating prior to 1939. The homes within the historic district reflect a variety of building forms and stylistic influences of the period, including houses derived from vernacular gable-front and popular early twentieth century forms and styles including the Bungalow, American Foursquare, Colonial Revival, Dutch Revival, and Tudor Revival. Most of the early houses in the district exhibit the influence of the Arts and Crafts Movement in their picturesque siting and stylistic characteristics. Development was substantially completed by the late 1930s; infill construction has continued since that time, owing, in part to WW II and the district's proximity to Ft. George Meade and present day interstates, however the district has retained its early twentieth century suburban character.

The development of the district seems to have followed several courses. The town was originally laid out on the east side of Old Annapolis Road (now known as Camp Meade Road). Some of the earliest houses were located close to a realty office and to the tracks of the Baltimore & Annapolis Short Line Railroad (formerly known as the Annapolis & Baltimore Short Line Railroad, chartered in 1880 — carrying the first passengers on March 9, 1887 and the Washington, Baltimore and Annapolis Electric Railway, an interurban electric line formed in 1902 and completed in 1908 as the WB&A), and the selection of these sites by the builder and the homeowners likely reflects the importance of convenient transportation to the community, aesthetic considerations, and as a promotional tool for the marketability of the new community. Examples include 300 Maple Road, 101 and 103 Catalpa Road, 200 and 204 Hilltop Road, shingled vernacular houses built in 1910s — among the handiest locations for access to the railroad station located across Camp Meade Road on Maple Road (one block) and the Linthicum Heights Realty Company office, located on the corner of Maple and Catalpa Roads. These early homes employ sloping sites for picturesque effect and to enjoy the best breezes and were easily seen from the train station.

In other cases, financial condition and land use seem to have influenced lot selection. A pair of near identical American Foursquares at 103 and 104 East Maple Road command the highest ground in the area overlooking the railroad tracks of which, one was built for the president of the WB&A Railroad. Lots located farther from the train station and sold by another realty firm were less expensive and usually larger than those located closer to the original subdivision. The additional development of land owned by the Luther Shipley family and known as Shipley Heights in the 1920s was adjacent to Linthicum Heights and is included as part of the Linthicum Heights Historic District. The Foursquare at 413 Hawthorne Road located on a deep double lot retained its barn, shed, chicken house and well house through the 1940s.

The initiative for construction of a given house may be traced to several sources. Some of the houses feature distinctive designs and are likely the work of professional architects. These were most likely built at the initiative of the property owner as a personal residence, either seasonal or year-round, or as a developer's models to attract attention to the community. Early examples include a Colonial Revival and an American Foursquare at 410 and 414 Hawthorne Road and a side-gabled Craftsman at 204 Hilltop Road built at the initiative of the property owners, and houses built as developer's models at 101 and 103 Catalpa Road and 200 Hilltop Road.

Other houses reflect the use of standardized architectural plans whose availability was widespread during the early twentieth century. A property owner might select a plan and engage a builder to construct the house — or a small-scale developer might build according to one or more of these plans, either to order or on speculation. Several small clusters of similar Tudor Revivals at 200, 202, 204, 208, and 300 Greenwood Road reflect the efforts of such "merchant builders" — in this case Charles Pardee.