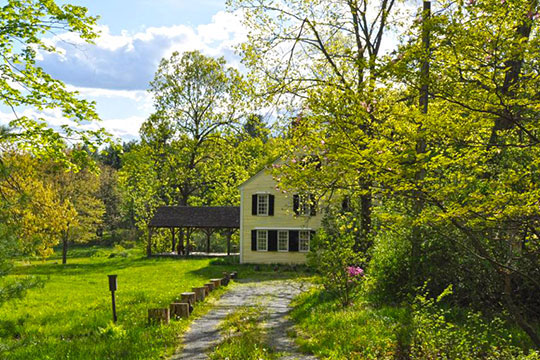 Shirley [1] is a small town on the western border of Middlesex County. Separated by the Nashua River from its neighbors to the east, Shirley is bounded by the towns of Lunenburg, Lancaster, Harvard, Ayer, Groton and Townsend. Its 15.7 square mile area is served by 49 miles of roads, including two state routes that run across the central and northern ends of town. Shirley has a number of character-defining features: large, contiguous forests, open farmland, a well-preserved historic center, and a compact industrial village set against the backdrop of the former Fort Devens. A distinctive landscape of high hills and low-lying valleys laced with streams defines the boundaries of three development zones, each presenting a different sense of the community. Throughout Shirley today, however, the image formed by views from the road is that of a rural enclave gradually evolving into a low-density residential town.

Shirley has grown and changed quite a bit in the past 30 years. Nearly half of its present homes were built after 1970, mainly in the central and northern sections of town. In 1971, 49% of Shirley's residential land use was comprised of low-density development: single-family homes on lots of an acre or more. By 1999, low-density development accounted for 62% of all residential land use. Although Shirley remains largely forested, residential growth has gradually fragmented the town's open space and altered the roadside in many locations. A small amount of business and industrial growth has also occurred in Shirley since the early 1970s: pockets of commercially zoned land in Shirley Village and along Great Road (Route 2A), and both new and industrial reuse activity on Lancaster, Leominster, Shaker and Walker Roads, and Fredonian Street. A striking aspect of Shirley's land use pattern is the presence of large, government-owned institutional uses. The state prison compound at the Shirley-Lancaster border, MCI‑Shirley, was expanded and reorganized in the 1990s and now includes medium- and maximum-security facilities on about 200 acres of state-owned land. The larger government-owned area no longer qualifies as an institutional use, and its disposition will continue to present major public policy issues for Shirley and neighboring towns.

No event has had more influence over Shirley's recent history than the closure of Fort Devens in 1995. Established as a small military training camp during World War I, Fort Devens became a permanent installation of the U.S. Army in 1931. It was expanded over time, eventually covering more than 9,000 acres in Ayer, Harvard, Shirley and Lancaster. During the Cold War, the Army invested heavily in new training facilities, more barracks, on-post services, and family housing for military personnel, including 156 apartments in Shirley. At the height of the Vietnam War, more than 12,000 people lived at Fort Devens. By the time federal authorities announced in 1991 that Fort Devens would close, Shirley's 702 acres had been put to use for multi-family housing, a small mobile home park, a classroom building, outdoor recreation facilities and a wastewater treatment plant. In 1990, more than 40% of the town's entire employment base was comprised of civilian jobs at Fort Devens, and nearly 13% of its school children were dependents of Fort Devens military and civilian employees.